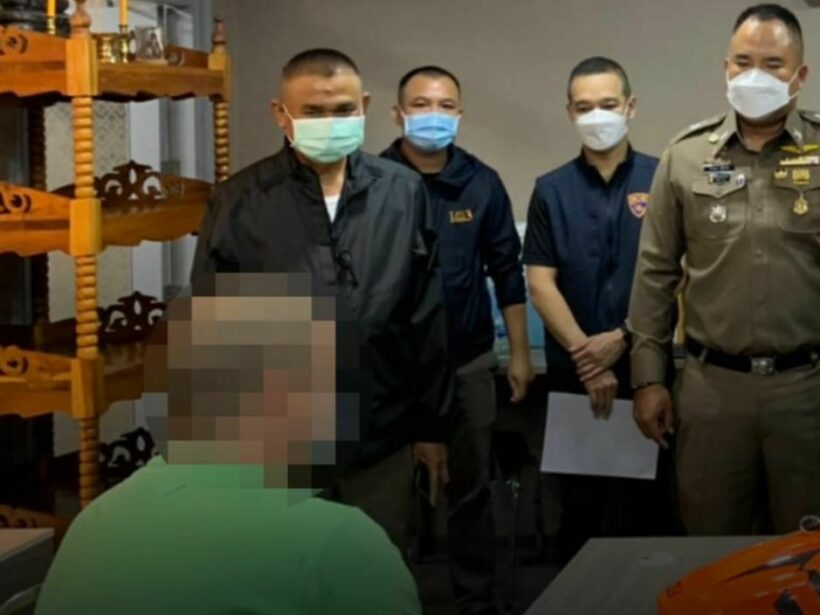 Police in the Isaan province Khon Kaen are seeking court approval to extend the detention of the sexual assault suspect, who allegedly beat and raped a Thai masseuse. The chief of the Muang Khon Kaen police station says officers want to detain the American for another 12 days due to concerns that the man might try to flee.

37 year old Robert Gordon faces charges for allegedly sexually abusing and raping a 45 year old woman at a massage shop last week. She was found bloody and naked on the floor. The same day, he allegedly molested a 13 year old girl in the Ban Phai district. Police say he fled Khon Kaen on his red motorcycle and was later arrested in Bangkok’s Nana area. Police say Gordon told officers that he was high on drugs and was not in the right state of mind.

Gordon’s re-enactment of the alleged assault, which is a standard practice in Thai law enforcement and usually open to the public, was cancelled at Gordon’s request after he said he feared for his safety. The masseuse’s son reportedly criticised the police for cancelling the re-enactment, saying a Thai suspect would be required to participate. The victim’s son said he wanted to confront the suspect at the re-enactment.

Stonker
38 minutes ago, Convert54 said: Perhaps a technicality that is carefully being covered? He was arrested and then transferred to Khon Kaen by a different provincial police jurisdiction. What is confusing is that if he has confessed then surely criminal…

NCC1701A
5 hours ago, Jason said: Given the plethora of evidence??....It should be a quick application. He confessed! What are going to do? Let him out on his own recognisance?? they have his ATM card and PIN number so he…

DoUKnowWhoIAm
8 hours ago, Jason said: Given the plethora of evidence??....It should be a quick application. He confessed! What are going to do? Let him out on his own recognisance?? Maybe "locked up" in an SAH+ Hotel, front desk will…

gummy
6 hours ago, DoUKnowWhoIAm said: If he's got cash, he can choose a hotel in Dubai. Or if not that much, than Phuket perhaps ? 😂
Viggen840
"Gordon’s re-enactment of the alleged assault, which is a standard practice in Thai law enforcement and usually open to the public, was cancelled at Gordon’s request after he said he feared for his safety." So the drugs must have worn…