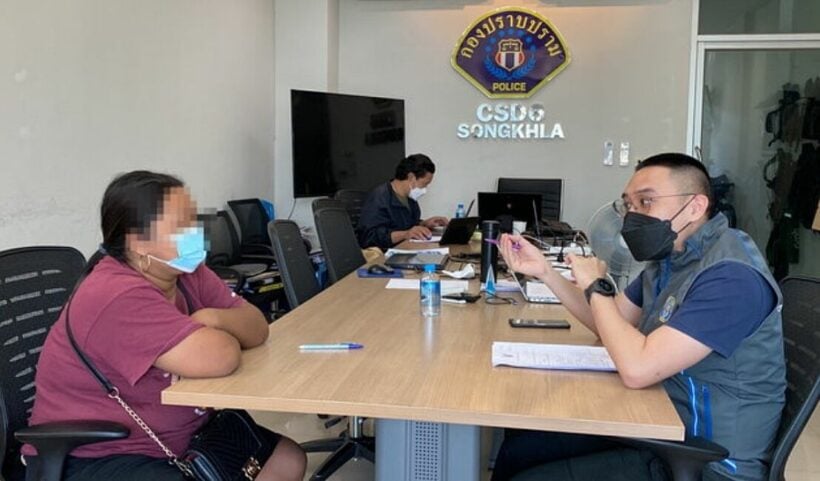 PHOTO: An insurance fraud ring was uncovered after a woman broke her own finger. (via Sanook)

A woman busted for breaking her own finger led to the uncovering of a syndicate perpetrating insurance fraud around Thailand. The leader of the group and 16 members have now been arrested after at least 16 cases of buying insurance and then cashing in 1 to 2 months later.

The group offered a service where they would find someone to participate using their name in the fraud, and then create an entire backstory including bank account, ATM cards, and house registration. Then they would use this data to buy insurance for the person before a sudden and unexpected planned accident or injury took place.

They would then claim the insurance and share part of the payout with the intentionally injured victim. Sometimes one person would injure themselves multiple times in different ways in order to collect insurance payments more than once.

The crime suppression division arrested a 39 year old woman from Songkhla that broke the case wide open and revealed the group had been working with multiple people to commit the insurance fraud. She had previously faked an accident where she claimed she fell off a motorbike onto the road by rubbing sandpaper on her skin to create the appearance of road rash. This time she used a pestle to smash and break her own finger.

The Criminal Court issued an arrest warrant for the woman on December 24. She had gone to the hospital and then filed an insurance claim where she was expected to receive 60,000 baht from the insurance fraud group for each injury she received.

An investigation has turned up numerous other fake injuries used to commit insurance fraud with a total of at least 14 million baht in damages. Further arrest warrants netted another 16 people who were caught on December 27 while the woman with the broken finger evaded police.

Intentional victims would pour hot water on themselves to create burns or fake car accidents along with numerous other ways to sustain an injury and file a fraudulent claim.