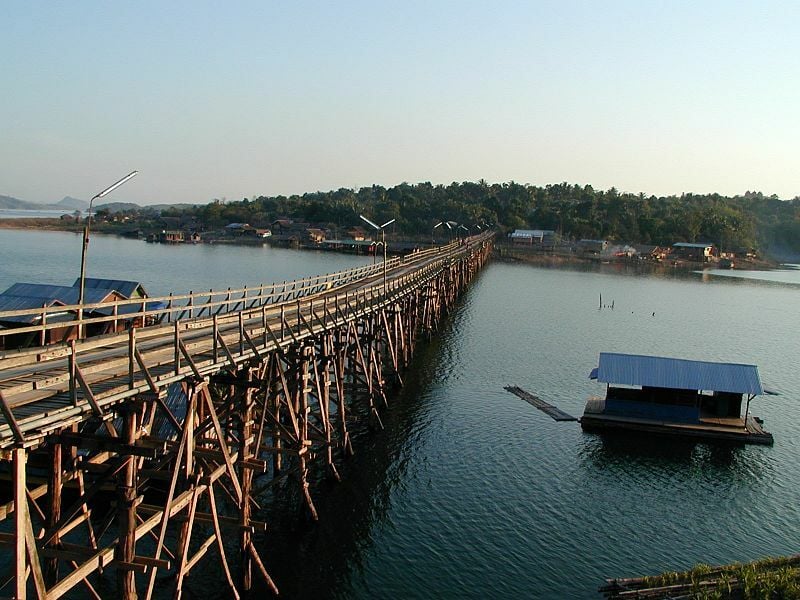 13 illegal Burmese migrants are under arrest today after being caught allegedly trying to enter Thailand through a bordering river. The job-seekers, one with a child, were arrested in the Sangkhlaburi district of Thailand’s western Kanchanaburi province this morning.

Villagers first spotted the migrants while they were in the river and notified the local officials, soldiers and police to investigate the incident. The officials found 14 people, including the child, hiding in a bamboo forest near Thi Khong village in Khao Laem National Park. They were taken to the Ranti bridge checkpoint where they underwent temperature checks, with none showing a fever.

The migrants told officials they were joining relatives for work in Bangkok and paid 15,000 baht each to travel brokers upon arriving to the site. Some of them say they had already paid half of the fee. The migrants said they were led by 3 Burmese guides who took them about 20 minutes to the border.  Then, they said they waded across the Ranti river to enter Thailand.

The job seekers were arrested by police when they arrived at Thi Khrong village and were waiting for a ride to Bangkok. The guides escaped, however, fleeing the scene.

The recent influx of illegal migrants comes after the February military coup in Myanmar, with thousands of Burmese people expected to flee to Thailand. Thai immigration police say they have blocked at least 7 natural border passageways. Immigration police chief, Sompong Chingduang, says he estimates around 400,000 Burmese migrants are looking to enter Thailand, adding that the bounty for the arrest of human traffickers has increased.

Police say there are now 102 illegal migrants being held at the station as they await legal action over their alleged illegal entries into the Kingdom. Police say more are expected as they are catching a daily increasing number of Burmese nationals crossing the borders in search of work.