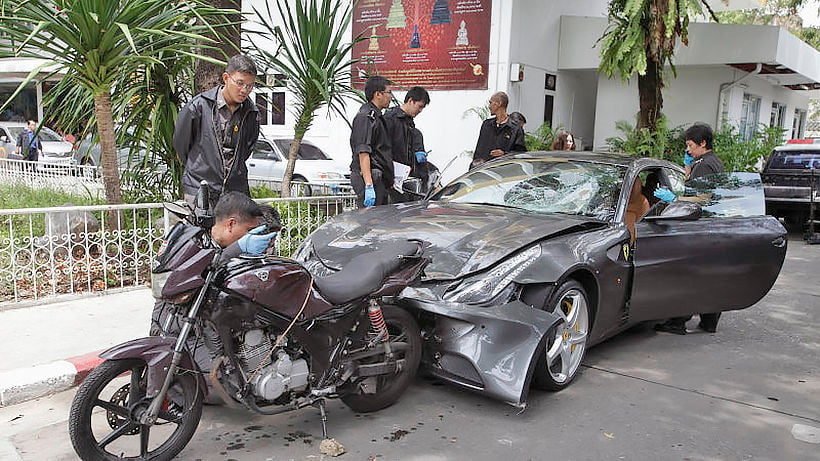 In another abrupt U-turn in the ongoing hit-and-run case of Red Bull heir Vorayuth “Boss” Yoovidhya, a forensic police officer who recently changed his mind and said Vorayuth was probably driving below the 80 kilometre per hour speed limit during his deadly crash in 2012, has now returned to his original testimony and declared the actual speed was indeed 177 kph!

His reversal comes just a week after a key defence witness, who planned the same testimony, died in a motorcycle crash in Chiang Mai. The witness’s mobile phone was later stolen and destroyed.

Thanasit Taengchan, who inspected the hit-and-run scene in 2012, yesterday gave evidence to a panel set up by national police chief Chakthip Chaijinda to review the case. He said Vorayuth’s Ferrari was travelling at 177 kph at the time it rear-ended the motorbike of the victim, 47 year old policeman Wichian Klanprasert, who was killed after being dragged 100 metes along the road in Thong Lor, Bangkok. This tallies with the information he gave back in 2012 to investigators, but in his second testimony, given in 2016, he retracted his original evidence, saying the speed was actually 79.2kph.

His latest statement comes just a day after PM Prayut Chan-o-cha said he was “not okay” with the handling of the high-profile case. Prayut told the Bangkok Post on Thursday that the case had drawn public attention, challenged the systems of justice and laws and affected public faith in the whole government.

“I would like to express my standpoint in the Boss Red Bull case, that I am not okay with many aspects that remain unclear.”

Thanasit explained yesterday that he kept changing the car speed information because he was “confused” about his own calculations.