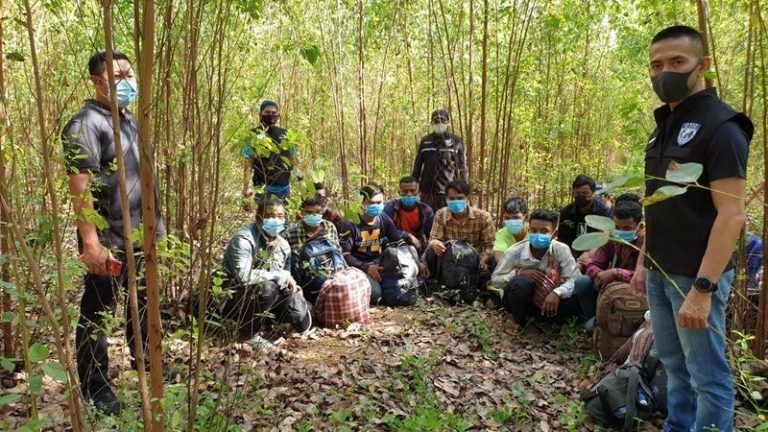 Nearly 2 dozen Cambodians were found in a forest near the Thai-Cambodian border. Thailand recently increased border patrol in fear that those sneaking in could be unknowingly be carrying the coronavirus. Numerous migrants have been arrested in the recent weeks for illegally entering Thailand through natural passageways, like rivers and forests, especially along the country’s western border with Myanmar.

Thai Residents calls it a “battle” against Cambodian and Burmese migrants who are trying to enter Thailand illegally, saying “their actions pose a serious threat against people living in Thailand.”

Yesterday, 23 Cambodian nationals allegedly entered Thailand’s eastern Sa Kaeo province and hid in a forest at the border until 2 trucks picked them up, police say. They were then dropped off at a eucalyptus forest in the Chachoengsao province as  they waited for another truck.

Foreign Affairs Division police tracked down the group after receiving a tip about migrants crossing the border. Police say they found 13 men, 9 women and a child hiding in the forest. The migrants told police they entered the country for work and were waiting on a ride to bring them to their employers.

The migrants were arrested and taken to the Khao Hin Son Police Station and the local health department will test them for Covid-19. They plan to deport the workers once they are cleared.

Over the recent weeks, police have also arrested a number of Burmese migrants for allegedly crossing the border. Officials tightened border control after Myanmar reported a surge of Covid-19 cases. While the outbreak is mostly in Myanmar’s Rakhine state along the western border, and the largest city Yangon, a Thai health official predicts the virus will reach the Thai-Myanmar border in the next 2 weeks.