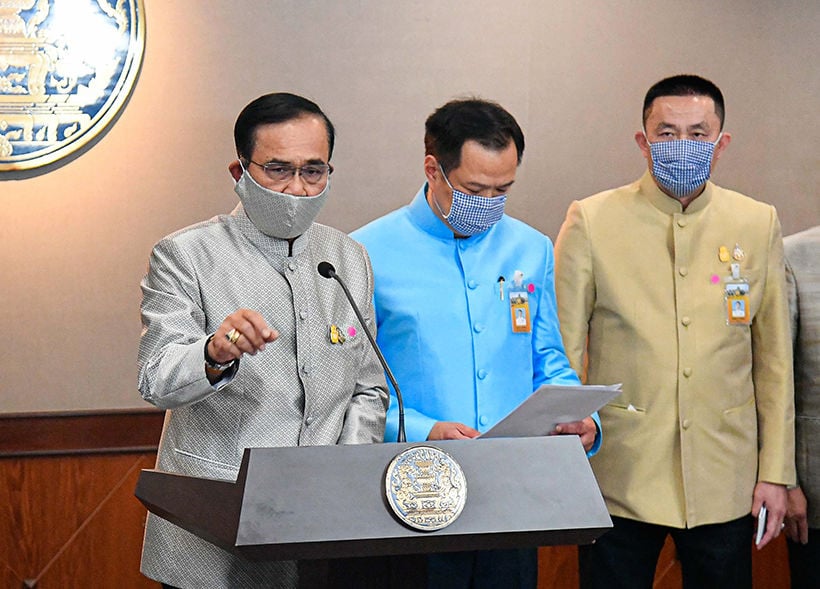 Calls from opposition parties for Thai PM Prayut Chan-o-cha to resign have been brushed aside by the Thai leader, who insists he has a job to do. Politicians from the Pheu Thai and Kao Klai parties have called for him to step down, with Jiraporn Sinthuprai from the Pheu Thai Party even going as far as to say she’s prepared a resignation letter for him to sign.

The PM responded to the calls by thanking MPs for not suggesting he flee from justice (a dig at his predecessor PMs, Thaksin Shinawatra and his sister Yingluck, both of whom are living in exile). The PM also appears to have taken umbrage at the way opposition figures addressed him, in particular the use of the word “dictator”.

“I always treat you with respect and have never used such language to you.”

The calls for a ‘step down’ repeat the call from students at rallies around the country who insist that Prayut step down, that the government is dissolved and new elections called, and that a new constitution is drawn up.

Thai PBS World reports that during a parliamentary debate yesterday, Suthin Klangsaeng from the Pheu Thai Party remarked that the PM works so hard, it appears he’s lost weight, but hard work is no good if it doesn’t meet expectations. He says were Thailand at war, the PM would be the right person to lead the nation, but if he cannot handle the economic war being waged on the country, he should resign, “so that people’s hope will be restored.”

Adding to the criticism, Pita Limjaroenrat from the Kao Klai Party points out that Thailand’s economy is currently the weakest in Asia and is only set to get worse unless the PM resigns. He says the PM is not fit to lead, pointing to the growing movement of anti-government rallies around the country.

“There is no precedent for the current protests against the Government by so many students, which have spread across the country. If he cannot solve the problems, he should step aside, before the country suffers more than it can recover from.”