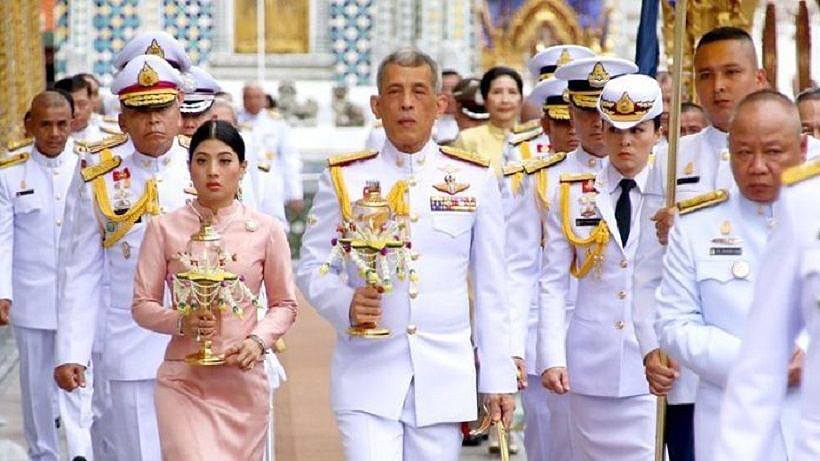 The Coronation of HM King Maha Vajiralongkorn Bodindradebayavarangkun will run over three days from Saturday, May 4 to Monday, May 6. The actual coronation takes place on the first day. Here is the latest LIVE link to the ceremony, mostly in English… 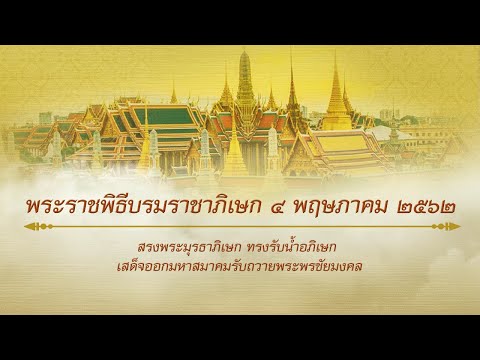 The Coronation ritual so far

The collection of sacred waters from different sources around the Kingdom, followed by the consecration and combining them for use in the Royal Purification and Anointment Ceremonies during the Royal Coronation Ceremony.

Provincial governors performed the ceremony of drawing water from a significant water sources in their province.

Consecration rites for the water were held in each province at royal temples.

The collected and delivered sacred waters from 77 provinces were stored at Wat Suthat Thepphawararam, one of Bangkok’s oldest temples in waiting for the Coronation.

The sacred waters were escorted in a procession from Wat Suthat to the Temple of the Emerald Buddha.

A ceremony to inscribe the full name of the new Thai King on Phra Suphannabap, a golden sheet.

The King paid respects in prayers to the deities.

A procession to carry royal items including inscribed golden sheet and the royal seal. 133 soldiers parade from the Temple of the Emerald Buddha to the Phaisan Thaksin Throne Hall in the Grand Palace. 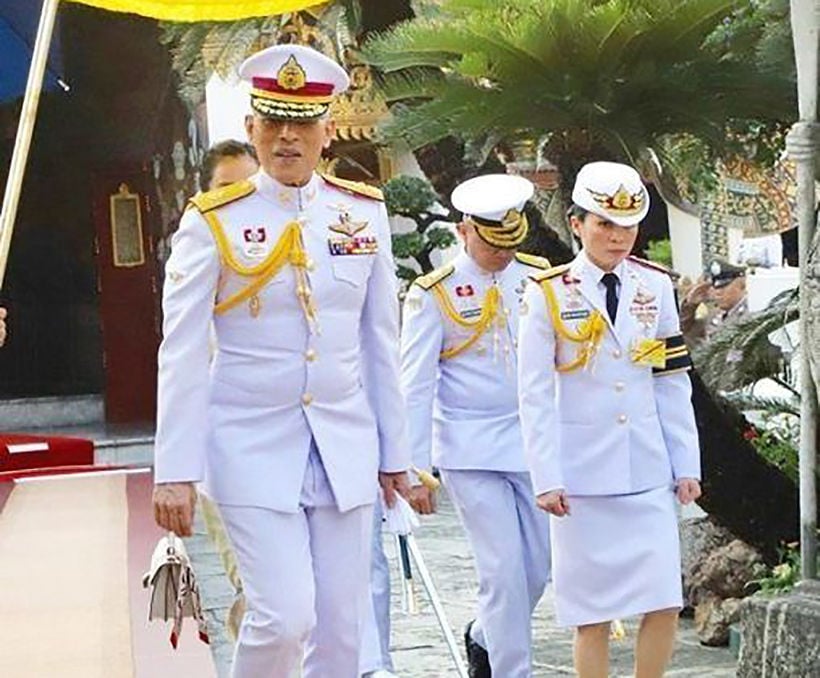 The inscription of the Royal Golden Plaques

Ten monks chanted prayers inside the Temple of the Emerald Buddha on the day before the designated day of the inscription ceremony.

HM the King visits the statue of King Chulalongkorn (Rama V) at the Royal Plaza and the Memorial of King Rama I at the foot of Memorial Bridge. 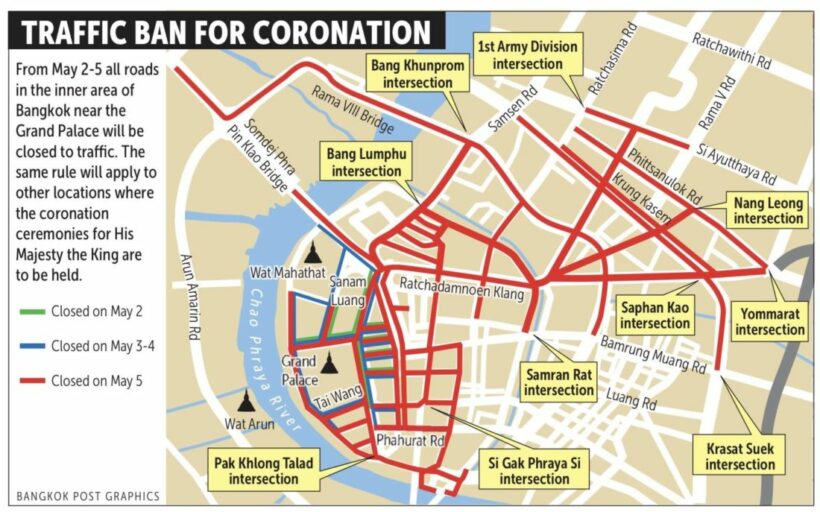 The Royal Purification, or the “Song Muratha Bhisek” Ceremony, takes place at Chakrabat Biman Royal Residence. “Muratha Bhisek” refers to the action of pouring holy water over the head of the king. It is followed by the Anointment Ceremony at Baisal Daksin Throne Hall. Then His Majesty the King proceeds to the Bhadrapitha Throne and sits under the Royal Nine-tiered Umbrella, where the Chief Brahmin presents him with the Royal Golden Plaque of His Majesty’s official title, the Royal Regalia, the Ancient and Auspicious Orders, and the Weapons of Sovereignty.

After the Crowning and Investiture Ceremony, HM presents the First Royal Command.

HM the King grants an audience to members of the Royal Family, the Privy Council, and the Thai Cabinet, as well as senior officials, gather to offer their best wishes to His Majesty at Amarindra Vinicchaya Throne Hall.

His Majesty proceeds to the Temple of the Emerald Buddha to proclaim himself Thailand’s Royal Patron of Buddhism.

The ceremony to bestow His Majesty’s Royal Cypher and Royal Title and to grant the royal ranks to members of royalty takes place at Amarindra Vinicchaya Throne Hall.

His Majesty the King rides in the Royal Palanquin in the Royal Procession on Land to encircle the city, affording people the opportunity to attend and pay homage to their new King.

The Route of the Royal Land Procession is from the Grand Palace, the procession comes out from Abhorn Bimok Pavilion through Vises Jayasri Gate. It turns right to Na Phra Lan Road, turns left to Ratchadamnoen Nai Road, turns right to Ratchadamnoen Klang Road, and then turns left to Tanao Road before moving toward Wat Bovoranives. The Royal Palanquin stops in front of Wat Bovoranives, where His Majesty the King enters to pay homage to the main Buddha image in the ubosot.

The procession continues to move along Phra Sumen Road and turns right to Ratchadamnoen Road, passing through the Rattanakosin Exhibition Hall. Then it turns left to Atsadang Road and Bamrung Mueang Road. The Royal Palanquin stops in front of Wat Rajabopidh, where His Majesty enters to pay homage to the main Buddha image in the ubosot.

The procession leaves Wat Rajabopidh, passing through Fueang Nakhon Road, and then turns right to Charoen Krung Road. The Royal Palanquin stops in front of Wat Phra Chetuphon, where His Majesty enters to pay homage to the main Buddha image in the ubosot.

The procession with His Majesty riding in the Royal Palanquin leaves Wat Phra Chetuphon along Thai Wang Road, moving back to the Grand Palace. It enters Vises Jayasri Gate to Abhorn Bimok Pavilion.

Monday, May 6 has been declared a special public holiday in order for the public to join the celebrations in Bangkok.

HM the King grants a public audience on a balcony of Suddhaisavarya Prasad Hall in the Grand Palace to present himself as the new monarch and receive the good wishes of the Thai people.

HM grants an audience to international diplomatic staff who offer their best wishes at the Chakri Maha Prasad Throne Hall. 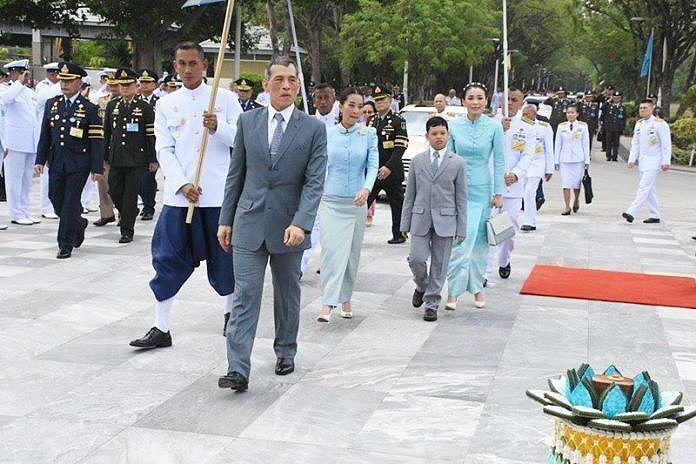 Here is some footage from the last coronation in Thailand when King Bhumibol became Thailand’s ninth king of the Chakri Dynasty. 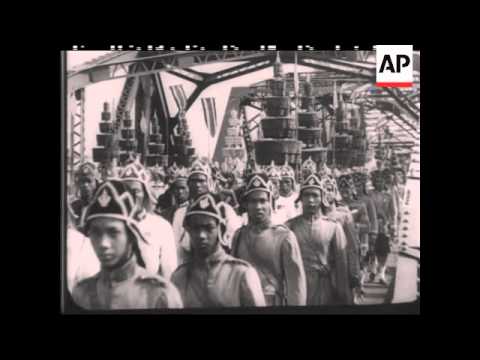 Surachate returns to ‘clerical duties’ at the PM’s office