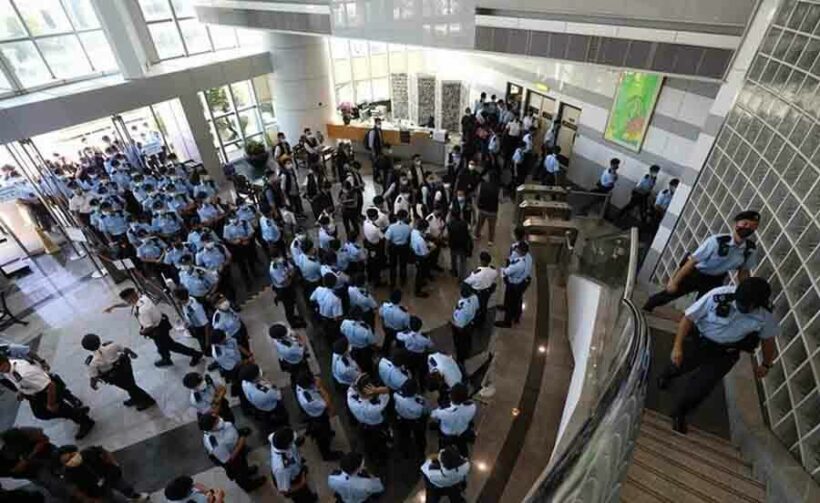 Hong Kong newspaper, Apple Daily, has confirmed that police have raided its offices and arrested 5 executives accused of foreign collusion under the national security law. The controversial law was introduced by Beijing a year ago and prohibits, “collusion with a foreign country or with external elements to endanger national security.”

According to Apple Daily’s own report, CEO Cheung Kim-hung, COO Royston Chow, Chief Editor Ryan Law, Associate Publisher Chan Pui-man, and Platform Director of Apple Daily Digital Cheung Chi-wai, have all been taken into custody. Police also carried out an early morning raid on the Apple Daily offices earlier today. According to the report, police blocked all entrances to the office in Tseung Kwan O. Employees had to provide their identity cards and other personal information before they could enter and were then only given access to the canteen. Journalists were not allowed go to their desks and were prohibited from filming or live-streaming what was happening.

The authorities have confirmed the arrest of the 5 executives, adding that their homes have been searched. According to the government, police used a search warrant to raid the Apple Daily offices. The warrant was issued under an article of the national security law which allows police to search, “premises, vehicles, vessels, aircraft and other relevant places and electronic devices that may contain evidence of an offence.”

The Apple Daily offices were also raided by police in August of last year, with founder Jimmy Lai among a number of executives arrested. Lai was charged with unauthorised assembly and jailed. He also faces several other charges, including foreign collusion and fraud.