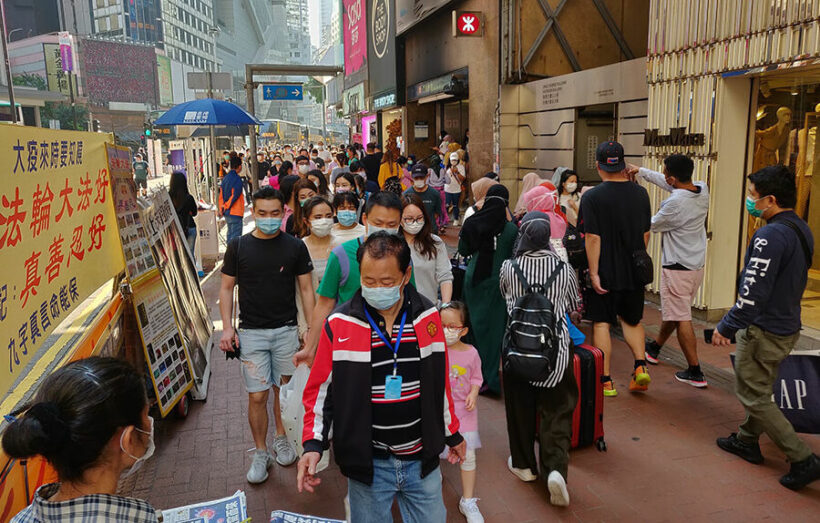 Hong Kong has found itself overwhelmed by an ongoing surge in Covid-19 infections, according to leader Carrie Lam. She has described the situation as an “onslaught” that has significantly affected the territory’s capacity to manage the spread, with daily infections reaching record highs and overwhelming the global financial hub.

According to a Reuters report, in the last 2 weeks, daily cases have multiplied 13 times, surging from 100 cases at the beginning of February to over 1,000 on February 13. Lam says officials are struggling to control the ongoing spread and the sharp rise in infections means people are having to wait longer between testing positive and being admitted to quarantine facilities.

“The onslaught of the fifth wave of the epidemic has dealt a heavy blow to Hong Kong and overwhelmed the city’s capacity of handling. The situation is highly undesirable and the government feels worried and sorry about it.”

The Hong Kong leader says her government will work with the Beijing authorities, following China’s offer to help with testing, treatment, and quarantine. Hong Kong officials will liaise with Beijing to improve testing capacity and isolation facilities, as well as obtaining more supplies of antigen test kits and PPE.

Reuters reports that health experts are warning that Hong Kong could see 28,000 daily new cases by the end of March. There is particular concern about the unvaccinated elderly population. Hospital beds are currently at 90% occupancy and isolation facilities are nearly full. The authorities are now prioritising the elderly, children, and critically ill hospital patients.

Meanwhile, as a number of other countries move towards a “Living with Covid” model, Lam insists that Hong Kong is still committed to the pursuit of a Zero-Covid status. Since the start of the pandemic, Hong Kong has recorded around 24,000 infections and over 200 deaths, significantly less than other cities of a similar size.

butterfly
they have low numbers, because people with little symptoms don't bother being tested, and why should they? zero-covid policy means little testing policy, unlike Europe TBH, Europe covid policy is actually quite successful compared to zero-covid policies countries with their…

Poolie
1 hour ago, Tim_Melb said: As I said Sinovac even when fully vaccinated provides only a very low level of protection against hospitalisation and death. So 90%+ vaccination rates with Sinovac will have little benefit against Omicron. No doubt the…
Tim_Melb
6 hours ago, Poolie said: Miaow!!! Ask Fauci who was paying for it to be researched in China. We yesterday had 40 odd transmissions. I think we'll cope thanks, as we always have. Oh that's the best one yet! Did…
Manu
4 hours ago, Tim_Melb said: Oh that's the best one yet! Did you think that one up by yourself or did it come from the CCP propaganda department? You should be careful about admitting that the virus was released from…

Poolie
7 hours ago, Tim_Melb said: Oh that's the best one yet! Did you think that one up by yourself or did it come from the CCP propaganda department? You should be careful about admitting that the virus was released from…

Thai-Malaysia border to re-open from next month

Tomorrow, Vietnam lifts restrictions on international flights from all markets