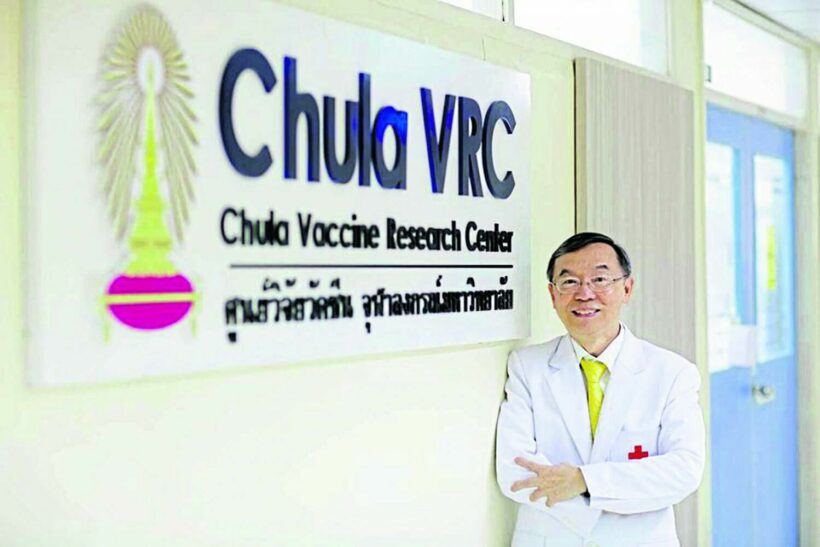 A research leader for one of the 4 Covid-19 vaccines developers in Thailand has pushed for a government fund of 3 billion baht to accelerate development and have vaccines out by Songkran 2022. Kiat Ruxrungtham, the research team lead for Chula-VAC001, an mRNA vaccine being developed by the Faculty of Medicine of Chulalongkorn University, has spent the last few days advocating for funding.

The doctor made another plea while meeting with Prime Minister Prayut Chan-o-cha when he came to the university to be briefed on the vaccine’s progress. He also said that funding and registering the vaccines should be allowed to sidestep at the bureaucratic red tape that will needlessly slow down getting the vaccine out. Kiat called for a clear, unchanging path to be in place by next month so that researchers can plan to get through the registration and Food and Drug Administration approval.

He said if the FDA doesn’t work with them on regulations, they won’t be about to get vaccine orders, manufacturing facilities, and production underway for distribution and use in the next year.

PM Prayut expressed encouragement for the vaccine developers, saying the government is watching their progress closely. He mentioned several vital uses for domestically created and produced vaccines, including use as booster shots for vaccinated people in Thailand next year, and as a stopgap to fill in for any vaccine shortages if there are any hiccups in the main vaccines being used in Thailand.

The prime minister did say that the FDA would have to work out the regulation and registration process on their own. He said it was impossible to skip the red tape, but that agencies must find ways to fast track progress. He acknowledged the 3 billion baht request, substantially more than the 400 million baht earmarked for vaccine developers, and said the government will have to explain and justify the spending.

The Chula-VAC001 vaccine will enter Phase 2b of trials in October with 5,000 volunteers after the first human trials found no serious side effects for the 36 people who received the vaccine and a 94% efficacy rate, plus an 80% efficacy rate against the Delta variant and other variants.

The Government Pharmaceutical Organization is moving to Phase 2 of their NDV-HXP-s vaccine that is egg-based and will be tested on 250 volunteers now with hopes of starting production next year and cranking out 30 million vaccines each year.

Baiya Phytopharm is working with another department of Chulalongkorn University, developing a plant-based subunit vaccine cultivated in tobacco leaves with the Faculty of Pharmaceutical Sciences.

Paco
Let's fill up the water guns with vaccine, everyone will be vaccinated in 1 day

AlexPTY
i am just wondering how many countries will let Thais vaccinated with this thing to enter?

Soidog
49 minutes ago, AlexPTY said: i am just wondering how many countries will let Thais vaccinated with this thing to enter? China….