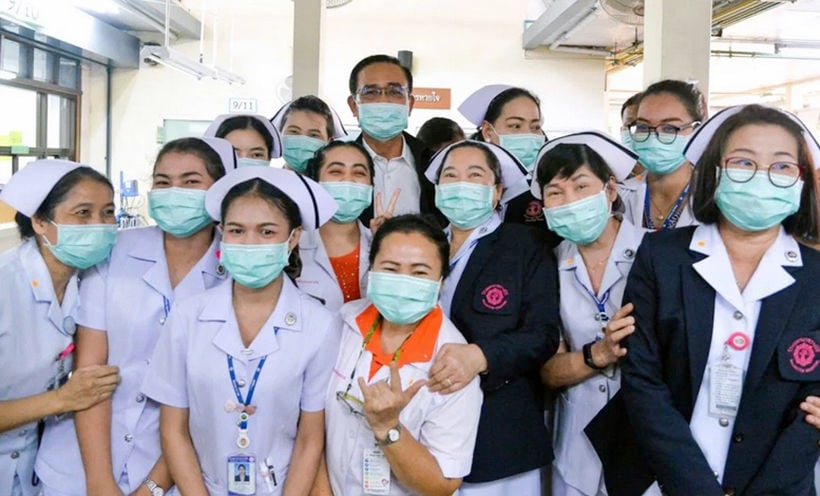 When the Covid-19 was first detected in Thailand in January, a time when the deadly virus and its contagiousness were barely understood, the kingdom might have seemed like a likely backdrop for massive infection and mortality. Untold hundreds of thousands of Chinese tourists visited the nation for the Chinese Lunar New Year holiday, and Thailand was the first country outside of China to report a case of the virus, a Chinese tourist.

With all the signposts pointing towards a regional Covid nightmare, many, sarcastically, posed the question… What could possibly go wrong?!

But when a well known doctor at the royally affiliated Siriraj Hospital projected in March that Thailand would likely have 350,000 cases and 7,000 deaths by mid-April without social distancing, PM Prayut Chan-ocha invoked the Emergency Decree, centralised management of the crisis and phased in hard ‘lockdown’ measures, many of which still remain in place today.

The kingdom has been comparatively lightly struck by the virus compared to many of its Southeast Asian neighbours with just 3,065 cases and 57 deaths as of today, and a recovery rate of 96%, some are still in hospital on their way to recovery.

Analysts, experts and diplomats may view Thailand’s official figures with a healthy dose of skepticism, mainly due to a lack of widespread and systematic testing, but few believe officials are involved in a cover-up to hide cases, conceal deaths or portray the nation in an inaccurately favourable light.

Indeed, there have been no reports of hospitals being overwhelmed with patients, nor has there been any discernible surge in pneumonia or other fatal illnesses, according to diplomats and regional health experts. There certainly hasn’t been a spate of Facebook posts with photos of dead bodies lining the streets. With a relatively free press and an even freer social media, officials would find it difficult to censor or hide any sudden rash of cases.

Bottomline, there has been nothing even vaguely suspect being posted online or shared.

Thailand’s so-far-mild Covid-19 experience probably owes to a uniquely Thai mix of factors, including a successful appeal to Thai nationalism that has underwritten “consensus compliance”, where stay-at-home and social distancing orders have been portrayed and obeyed as a patriotic duty. That’s seen in near universal adoption of mask-wearing, with Western tourists and expats often the only maskless ones. But they soon fell into line after it became compulsory or realising that the wearing of masks may indeed be a successful part of the prevention experience.

The tentative success could also be in part due to culture: Thais traditionally greet without touching, using the “wai”. Moreover, Thailand’s universal public health care system is a regional, if not global, role model, with low cost medical treatment available nationwide. That includes village-level rural health volunteers, who even in non-pandemic times, have their fingers on the pulse of local communities. Early on the Thai government also guaranteed that all Covid-19 cases, even foreigners, would be treated free of charge.

But Thailand’s relatively successful Covid-19 strategy is not yet firmly established, according to health experts. One ex-World Health Organisation official calls Thailand’s Covid-19 case count “amplified anecdotal” data, due to a lack of systematic and targeted testing. Thailand has tested only around 376,000 in a nation of nearly 70 million.

“Nobody knows the who, when, why or where of the tests and without that specificity we are still whistling in the dark.”

That includes among Thailand’s foreign migrant community who often live in less hygienic and more cramped quarters than the Singapore dormitories that have unleashed a “second wave” of new infections in the city-state. Singapore had previously been portrayed as a Covid-19 success story but now has become a cautionary tale with the highest number of cases in South east Asia whilst having one of the smallest populations.

Malaysia too is now grappling with a surge of new cases among its migrant population. Estimates vary but anywhere between 4-5 million migrant workers normally live and work in Thailand, though many have now returned to Myanmar and Cambodia.

Thailand’s virus response has not been entirely home-grown. One official close to PM Prayut believes Thailand’s success derives in part from cooperation with China, which he says has offered discreet medical advice on how to treat patients based on lessons learned in containing its outbreak in Wuhan, the disease’s most probable epicentre.  Still, analysts agree that Prayut deserves certain credit for steering a firm and coherent strategy after an initially erratic virus response.

That included some less-than-helpful quotes from his public health minister who, in the early days, disparaged the “dirty farang” for not accepting the free face masks he was handing out at a PR stunt in Bangkok. After a few missteps he was sent to far-flung provinces for photo opportunities.

At the same time the government put in place daily reporting and a talented communicator and medical professional, Dr. Taweeslip Wisanuyothin, who provided detailed reports, 7 days a week, often offering doctors and other medical experts to assist in answers from the local and foreign media, and one-on-one interviews. Dr. Taweeslip became a voice of assurance and was the perfect front-man for the government’s Covid-19 strategy.

But the Thai PM will have a much harder time maintaining his success story narrative as the kingdom emerges from lockdown to face the pandemic’s economic devastation. Thailand’s central bank projects a 5.3% economic contraction  and some private banking analysts predicting up to 8%.

Still, Prayut is under rising political and economic pressure to ease the lockdown and reopen the country’s closed borders. His government’s phased easing measures notably coincide with the start of the rainy season, when Thais often catch cold or contract the flu as the weather shifts from blazing hot to steamy and damp.

But any Covid-19 second wave, attributed to new community infections or inbound travellers, would be a public relations disaster for a nation that relies so heavily on tourism and the outside world for its growth and prosperity. Prayut can take some credit for Thailand’s Covid-19 success story, for now, but his victory lap could well be short-lived.