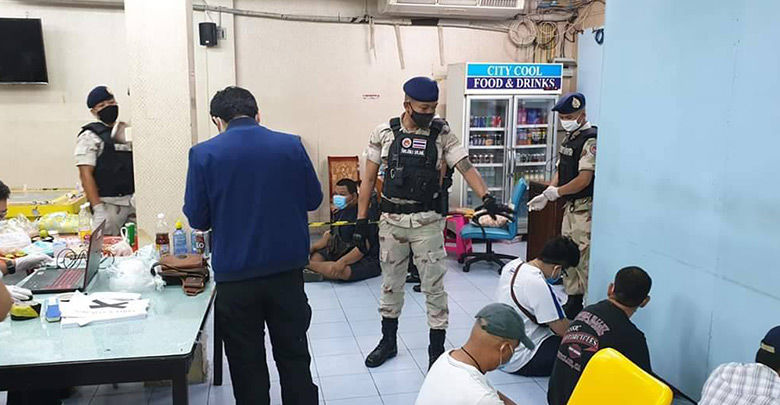 Too close and too many people. Over 100 have been arrested illegally gambling in a secret casino near the Nonthaburi Market.

The Department of Provincial Administration raided a casino in the greater Bangkok Metro Area‘s Nonthaburi province and discovered 200,000 baht in cash, Hi-Low boards and two gaming machines, along with 108 people, some estimates as high as 122, taking part in the illegal activity and ignoring the health and safety regulations of social distancing and refraining from large gathering during this emergency Covid-19 crisis.

The game of choice at the casino was Thai style Hi-Low which is played using a Hi-Low board with a dice shaker and two to three dice. The gambler will place their money on a number square from one to six. Once the dice are cast and the results come up, the winner then takes all, but more often than not, the house wins (surprise!).

The DOPA received a tip from locals in the area worried about lack of social distancing as a potential hot bed for the virus. The residents said, despite the Emergency Decree, curfew, and social distancing requests issued by the government, people were still coming to gamble every day.

When officials arrived at Soi Piboonsongkram 32, officers confiscated the gambling equipment and arrested all 108 before they had a chance to escape. All who were arrested along with the security officers involved in the raid will all remain in quarantine for the next 14 days.

Who will receive free coronavirus testing?