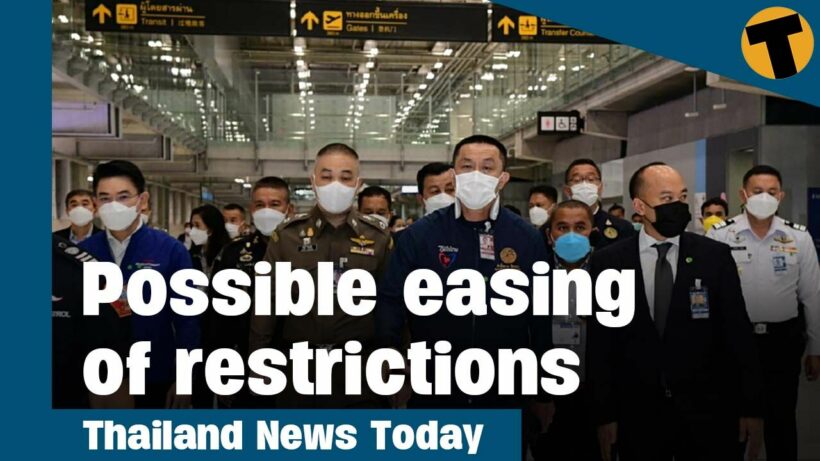 Test & Go was suspended around 4 weeks ago as the highly-contagious variant spread around the globe. Now, Anutin Charnvirakul says he’ll ask the CCSA to consider bringing it back, as well as easing a number of other restrictions.

The Bangkok Post reports that Anutin will put his request to the CCSA following talks with the Department of Disease Control in which it was confirmed that Omicron has not led to the wave of severe illness and hospitalisations the government initially feared.

Anutin says he wants to see a balance struck between disease control and rebooting the struggling economy. What is not known however, is if he plans to propose the re-opening of nightlife and entertainment venues.

The minister has long held the view that such establishments are breeding grounds for the virus, with several major clusters linked to recent end-of-year celebrations.

In related news, the Centre for Medical Genomics at Ramathibodi Hospital says Omicron has now almost completely replaced Delta in the capital. Tests run on infected patients in Bangkok and elsewhere in central Thailand show 91% of cases are the Omicron variant, whereas Delta accounts for just 2.8%.

The centre says that eventually, everyone will probably contract the milder Omicron variant, which will help build immunity.

The Thai Prime Minister has instructed relevant agencies to follow the latest on the volcanic eruption in Tonga and to ensure Thailand’s disaster warning system is working.

Government spokesperson says the Tonga eruption over the weekend took place around 9,500 kilometers off the coast of the southern Thai province of Narathiwat. The eruption was so huge it prompted tsunami warnings and advisories for several countries across the Pacific Ocean, including American Samoa, New Zealand,

Australia, Japan, and the US.

On December 26, 2004, an earthquake off the coast of the Indonesian island of Sumatra triggered a tsunami in the Indian Ocean which killed approximately 228,000 people in 14 countries, including an estimated 8,000 in Thailand.

Here’s a statistic Thailand is proudly No.1 one of, depending on who you ask. A study by virtual private network firm Surfshark shows that since 2011, Thailand has submitted over 1,100 requests for Google to remove content, over 95% of those requests were about content considered critical of the government – the highest rate in the world.

As part of the study, Surfshark says it analyzed Google’s Transparency Report. Thailand is ranked at number 16 in the world due to 1,147 requests for the search engine to remove content. During 2020 alone, the government made 184 requests for content to be removed.

“A massive 95.2% of these requests cite ‘government criticism’ as the reason – as an overall percentage, that’s more than any other country.”

Google receives thousands of requests a year from governments who want online content removed. The nature of the content varies, with claims ranging from intellectual property infringement to defamation. Surfshack adds that Russia is by far the most prolific content removal requester, submitting over 123,000 requests in total over the past 10 years.”

According to the Bangkok Post, national security is the most common reason given by Russia when requesting content be removed. Meanwhile, Turkey is ranked behind it, with over 14,000, followed by 9,900 requests from India and 9,600 requests from the US.

The government plans to cut the budget for its tour package subsidy scheme, which received a lukewarm reception among Thais.

The Tourism & Sports Ministry will also reduce the number of tour packages available from 1 million to 200,000. Tourism minister พิพัฒน์ รัชกิจประการ admits that after 3 months of implementation, the ทัวร์เที่ยวไทย scheme has proved ineffective in driving domestic trips.

Phiphat acknowledges that Thai tourists usually prefer to travel independently with family and friends as opposed to availing of tours. He says this is particularly true during a pandemic, as people want to avoid traveling with large groups of strangers.

Meanwhile, the government plans to continue its hotel and airline subsidy scheme, We Travel Together, submitting a phase 4 proposal for Cabinet approval. Phase 4 is expected to begin in February and run until September. Phiphat says he expects the extra 2 million room nights under the scheme to be fully booked by April, due to the Songkran holiday.

A group traveling by speedboat from Koh Chang had to be rescued after the boat hit rocks, causing it to take on water and sink.

The seven people on board the speedboat, including the skipper, were floating in the Gulf of Thailand off the coast of Trat’s เกาะลิ่ม for around two hours.

The 62 year old skipper told Thai media that he was hired by a group who wanted to travel to Koh Chang to visit their relatives.

Around 4 pm, while traveling back from the island, the boat hit rocks and cracked. All passengers wore life jackets and looked after one another, especially the elderly woman, as they floated, keeping an eye out for the rescue team. One man says he will never forget this accident.

In another nightclub raid in Pattaya, police called a locksmith to open the venue, which officers say, was still operating after the 9pm cutoff time for alcohol sales, but had the doors closed and locked to make it appear that it was closed.

Police say that The Box 69 Club in ซอยบงกช of Southern Pattaya turned off some of the lights and turned the music down low, but staff and customers were still inside partying. Apparently, police were outside, knocking on the door, for about two hours. When they called a locksmith to the club, they found more than 50 people inside.

According to measures set by the CCSA, approved restaurants in “blue” zone provinces, like Chon Buri, are allowed to sell alcohol until 9pm only. Some bars and nightclubs, with permission from the government, are allowed to open as “restaurants.”

A number of bars and restaurants, especially in Pattaya, have been busted for serving booze past the 9pm cutoff time. Many have turned their lights down after 9pm and have served alcoholic drinks in paper cups in an effort to be more discreet.

Police have been regularly cracking down on venues that open past 9pm. Because apparently THAT is THE heinous crime to commit in this city.

Rain
Hope springs eternal for some. Might help to ease the backup, confusion and those on the fence. Let's hope this one sticks.