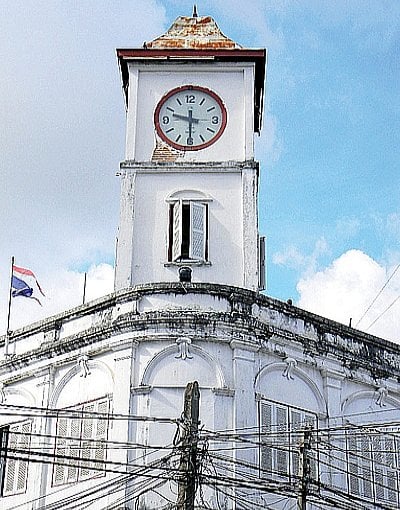 PHUKET: Premises such as the Standard Chartered Bank and the police station in Phuket Town will soon be restored to former glory.

It’s always interesting meeting with Pranee Sakulpipatana, who works to ensure that local people learn and celebrate their heritage. She comes from a Chinese/Thai family who were originally merchants on Thalang Road, Phuket City’s “Road of Culture”.

Pranee taught at the local Rajabhat University for over thirty years and developed the Phuket Culture Center on the campus. Since her retirement a few years ago, she has redirected much of her energy into finding funding for the restoration of the many classic Sino-Portuguese buildings that are in disrepair around the city’s inner core.

“Perhaps two of the most well known buildings in town are the former police station and the Standard Chartered Bank buildings, which sit on opposite corners of Phang Nga and Thepkrasattri Roads. Both are featured on post cards and promotional materials for Phuket and both are falling apart. We are now working to have them restored and used as public museums to attract more visitors to town,” said Pranee.

She is the island’s most active historian and goes on to explain that one hundred years ago, King Rama V and his son (later King Rama VI), both saw the potential for the development of tin mining and rubber farming on Phuket based on similar industry happening in Malaysia at the time. However, there was little investment money to be found on the island until an arrangement with the Standard Chartered bank allowed them to open a branch on Phuket.

“Up until 1910, the only money lenders on Phuket were the chettiar community from southern India and their interest charges were too high for local business. The introduction of Standard Chartered Bank, that offered lower interest rates for tin dredging operations, meant the local economy could grow. The bank was built in a classic Sino-Portuguese style and the police station was then constructed across the street to provide protection,” she said.

The police building had the island’s first clock tower, but oddly no clock was installed for over 50 years.

“The police building was modeled on colonial structures popular at the time, with a space for a clock. Back then, people could not afford to buy watches and they depended on the clock tower. But there was no budget to buy a clock so the space stayed empty. After 40 years, a clock was purchased in Penang, but it never made it to Phuket as the boat that carried it, sank. We finally got a clock over 50 years after the police station opened,” she added.

Pranee has many stories about Phuket City’s historic Sino-Portuguese buildings.

“Many are in bad repair because they are very expensive to restore. The original building materials were not strong and generally made with local limestone, which holds water. There are no government funds to help maintain these buildings while another issue is that family disputes arise when various members of a family cannot agree if and how to preserve their historic home,” Pranee said.

Fortunately, we have been given permission to restore the Standard Chartered Bank and we will reconstruct how banking operations were conducted from over a century ago. This will be of great interests for visitors to Phuket. Currently, we are receiving donations for the renovations. We are hoping to restore these buildings to their original beauty,” she said.