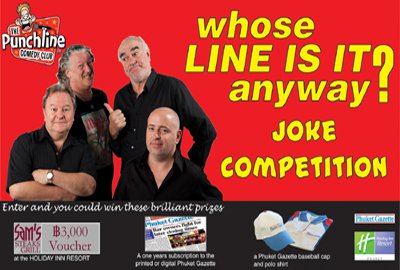 In the run up to The Phuket Punchline Comedy Club’s February 29 ‘Whose Line is it Anyway?’ show, the Gazette asks each of the comedians about themselves. This week its the diminutive Ian Coppinger.

Where and when were you born?

I was born in Dublin in 1970. I was actually born in my parents house, my mother didn’t like the fuss of having babies in the hospital so I was born at home, however as soon as I was born I was very ill and had to be rushed into hospital anyway, so I ended up spending my first Christmas in hospital.

PG: How, When, Where, Why did you become a comedian/comedy performer?
IC: I did my first ever comedy show in school when I was 16. I was in a double act called “fat mans picnic basket” and there was a Christmas show on. everybody else in the school was in a U2 cover band so myself and a friend decided that we would do comedy instead. I was addicted from the first laugh.

PG: Did you/do you have any comedy heroes? If so, what do you like about them?
IC: I have always liked Monty Python and in the very early days I was a big fan of Charlie Chaplin. Later in live I found Seinfeld and loved that. in terms of stand up I really like Dylan Moran, Steve Hughes, Tom Stade and Glenn Wool. There are loads of others, too many to mention.

PG: Which current comedian makes you laugh and why?
IC: I recently did a show with Carey Marx and he really made me laugh.

PG: Have you been to Thailand before? If so, when, where and what did you like and dislike about it?
IC: I have been to Thailand a couple of times before. I really like it but sadly when I am there I tend to work every night and therefore don’t get to see as much of it as I would like to see. I really love the food. there is a Thai restaurant around the corner from me in Dublin and its so disappointing whenever I go in there because, although the food is good, it is nothing like what you get in Thailand. I will have to go sometime in the future and spend a good long time just traveling around.

PG: Have you performed in Thailand before? What was it like?
IC: I have performed there a couple of times in the past and I really like it. The audiences are great. In the past I have only done stand up so I am really looking forward to doing the improvisation show there as I think that the audiences will really love it as they are such a big part of the show.

PG: Any other useful info for an article about you?
IC: The show that we are doing in February contains some of the original people from the TV show “Whose line is it anyway?” and is much better than the TV show, as the audience is a real part of it. It’s great fun. We have toured the world with this show and are really looking forward to doing it in Phuket.

Phuket Lifestyle: Dream of it and they will come