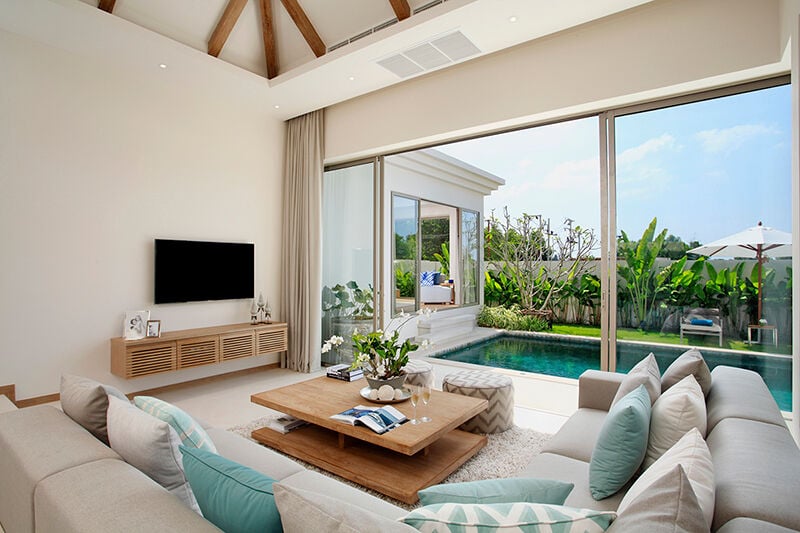 Urban flight has driven Phuket’s once investment-focused property market in an entirely new direction. This seismic shift has resulted in a dramatic return to real estate basics. Focusing on the pandemic era of the past two years, a constant flow of new incoming residents from both abroad and Bangkok has seen the scales tip, as rental demand has vastly exceeded supply in upscale and luxury properties.

In the backdrop of an inward rush for single-family homes, many developers have exhausted inventory and in the wake of new launches, have sold out at a rapid pace. One prime example is the Trichada branded estates in the prime Laguna-Cherngtalay area. The developer who amassed strong credentials with the successful Sai Taan project followed with three Trichada branded ones.

The group’s brand new project offering that has just come on the market, named Trichada Breeze. With eighteen three and four-bedroom resort-styled homes in its first phase, anxious buyers have snapped up five units in the first weeks after the soft launch. With prices that range between THB15-23 million (USD440,000-675,000), the homes are tapping into a soft spot in the market.

Speaking to real estate agents across the island, many renters are looking at the northwest areas of the island such as Kamala, Surin, Bangtao, Cherngtalay, Layan, and Yamu. Many renters who are moving to Phuket consider key demand generators like international schools as prime motivators with British International and UWC often cited due to their prestigious overseas affiliation and curriculums.

The surge in single-family homes has also been exceptional in the USD1-2 million band as can be seen in a growing collection of projects by Botanica and Anchan. Both are leading examples of strong demonstrated success with buyers able to obtain premium rental levels and above-market capital appreciation. Resale demand due to the lack of new products in key areas has pushed owner gains higher.

Looking at key advice for the purchaser, early buys off-plan in a good location and experienced developers typically generate the highest appreciation. Four-bedroom single-family homes are in short supply and fit the profile of families who are relocating from Singapore, Hong Kong, and Bangkok. The latter is driven by a rising tide of multigenerational living and the need for working from home space or areas that buyers want to customize for their hobbies or lifestyle.

Thaidup
Phuket has one fundamental non variable, It is an island, expansion beyond the size of the land will be extremely expensive. It only makes sense that the price of property will increase faster.
BIGGLES
The whole article is fanciful. Who is buying? Just take a look at any Phuket property site, there is property of all shades, from high end to s..t hole, and it is still not let. If you own a property…

Soidog
8 hours ago, BIGGLES said: The whole article is fanciful. Who is buying? Just take a look at any Phuket property site, there is property of all shades, from high end to s..t hole, and it is still not let.…

KaptainRob
On 5/6/2022 at 12:12 AM, BIGGLES said: The whole article is fanciful. Who is buying? The article, or advertorial, expresses a valid opinion regarding demand for quality developments such as those promoted. We see the same demand here in Chiang…

Thailand News Today | Underwear thief on the loose in Chonburi!