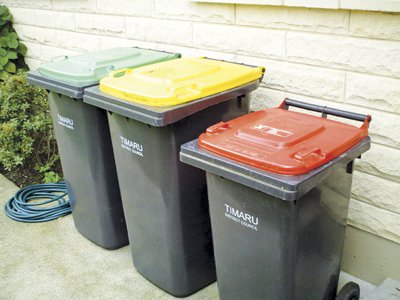 PHUKET: Reading the above headline you would have to believe that either I somehow suffered a momentary nervous breakdown, or else those three drinks before dinner were triple shots.

Does the truth lay at the bottom of a glass, obscured from sight by the swirling ghost of a melting ice cube? Probably not.

There isn’t much poetic license in real estate. Yet sideways down on Main Street on Juxtaposition Avenue, are our three buddies, all named location, side by side.

You have to love those little property buzz terms – my personal favorite is ABC: “Always Be Closing”. It gets straight to the point in broad daylight. Nowhere to hide, no side-stepping failure. Close the deal or else get out of town.

Here in Phuket, when you measure the success and failure of those projects which stood out from the crowd – it’s not easy to separate them. It’s as complicated as those color-coded recycle bins.

Personally, it’s all Greek to me, blue, gray or other shades of confusion. As I approach the recycle bin with my used plastic coffee cup, I look for clues. Dazed, my mind turns to sticking my head inside the bins just to see which one is which. In the end, I just make a split second decision and hope for the best.

I almost sound like an overwhelmed property buyer here.

Backing up my metaphorical trash truck to the dumpster of business life, that beeping sound drives me insane as the monster machine rolls over a sleeping cat. Cats don’t buy real estate so let’s just keep on moving.

Our friend ‘the great scorer in the sky’ (or coming into the festive season it could be Santa) keeps tally on who’s naughty or nice. But we tend to look at winners or losers, deals that make money or bleed money.

So what made the difference between successful and unsuccessful transactions? Of course there’s a laundry list: views, ocean frontage, design, proximity to popular places, be they shopping, schools, golf courses or marinas.

Wait, according to their brochures, every single one is minutes away from everything and whether you stare at the sea, glimpse it, or just spot an occasional seagull, the water remains a magical divining rod.

Or is it hotel management; guaranteed returns; lifestyle and the lure of bag-stuffing return yields? And of course ‘luxury’, be it understated, uber or ultra – those strange symbiotic – twins, affordable luxury or just the cheap kind.

Our celebrity mindset still loves named brand architects or interior designers that more often than not lead me to the Google monster.

In this day and age of MBAs and Harvard Business School, not often does the verbiage turn to luck. Let’s leave that to Las Vegas or Macau, or even the lottery. Luck defies men in well-dressed suits and targeted up business plans. Nor does it appear in those numbered out secrets of real estate success.

It’s a bit like the American Dream. Roll up your sleeves, work hard and you too can succeed like a scrappy junkyard dog. Keep handing out those business cards. Network till you drop. The world is your oyster.

Still, I was speaking to a sage developer the other day, and his simple advice went like this. “Buy spectacular land, or spectacular homes… Don’t muddle in the mundane.” Mind you more than a few ice cubes had melted down so the whiskey was straight.

But how does this translate to someone shelling out 2 million baht for a shoe-box condo? It doesn’t.

Beep! The dumptruck is in reverse again and about to roll down the hill out of control. My three amigos, those Lucky Ls, stand at the ready and a new mistress Lady Lucky is ready to hit the road.

Perhaps I’ll just ask the bartender to freshen up my drink instead, throwing in a couple of ice cubes. Now where did we come in?

Bill Barnett is Managing Director of C9Hotelworks and can be contacted through C9hotelworks.com.