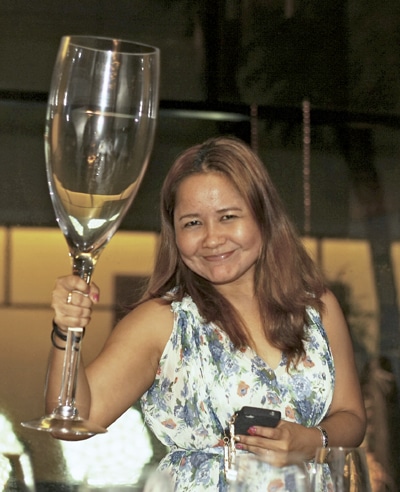 PHUKET: Recently, the owner of the Wine Lovers wine shop in Chalong asked me to assist at a wine tasting with a different twist. Instead of comparing the merits of the wines, we were to compare the various merits of the wine glasses themselves – a “glass” tasting.

Now, I am aware of the almost mystical properties that some glassware is purported to have and how it is designed to bring out the best in certain grape varietals, but I must admit to being a little skeptical.

To prove the theory at this event we performed what could be best described as a scientific experiment, complete with wine glasses in place of beakers and fine wines instead of chemical solutions. Remember, kids, don’t try this at home.

On the table in front of us were a clear plastic cup and five numbered wine glasses, each a different shape and size. Four of the glasses contained wine – two reds, two whites.

We were first instructed to taste a rather good Riesling from glass number two – no problems there and happy to oblige. We were then to pour the same contents into the empty “joker” glass (number one) and repeat the tasting. The difference was outstanding. The wine’s bouquet had disappeared and the taste had completely changed – yet the wine itself was the same one. Eureka! We had just discovered the secret of grape varietal glasses made by the Riedel company in Austria.

The Riedel family business has been making glasses for over 250 years, with 11 generations keeping it going from strength to strength.

More than 50 years ago Professor Claus Riedel first recognized that the bouquet, taste, balance and finish of wines were somehow affected by the shape of the glass from which they were consumed, and thus began his pioneering work to create glasses that match and complement specific wines and spirits.

In the late 1950s, Riedel started to produce glasses which, at that time, were a design revolution, made according to the Bauhaus principle of form following function.

As our experiment continued, we discovered that the Riedel glasses gave each wine variety more depth and a better balance than when served in the standard ‘joker’ glass or the dreaded plastic cup.

Riedel’s VP of sales and marketing (Asia), Frantz Dumey, then told us to pour the different wines into different Riedel glasses that were not specific to the wine we were tasting – in this case the Pinot Noir into the Chardonnay glass.

Frantz Dumey explained why the glasses were different from each other: “Each varietal has a different DNA, so if the wine is acidic, like a Pinot Noir from Burgundy, then you would not want the wine to flow to the acidic sensors of your palate – you’d want it on the sweet part to get more balance. Likewise, if you had a Cabernet Sauvignon, which is more tannic, you would not want the wine to flow over the tongue in the same way. A wine’s bouquet, taste, balance and finish are all affected by the shape of the glass it is consumed from. Also, ‘size matters’, and the volume of air present affects the taste as well.”

When asked how one could recognize a Riedel glass from another brand, he pointed to the small engraving at the base of each glass. A distinctive Riedel signature is now featured on the base of all hand-made products in Austria. The machine-blown version has the Riedel name engraved with modern typography.

No longer a skeptic, I now own a set of these glasses which are only available at selected department stores and shops (Central Festival and Wine Lovers in Phuket).

With the price of a good bottle of wine being what it is here, it made sense to me to invest in the equipment that will do it justice. Oh, and by the way, forget what I wrote earlier. This is an experiment you really should try at home.

More information on Riedel glasses can be found at riedel.com.

Phuket Books: Present at the creation