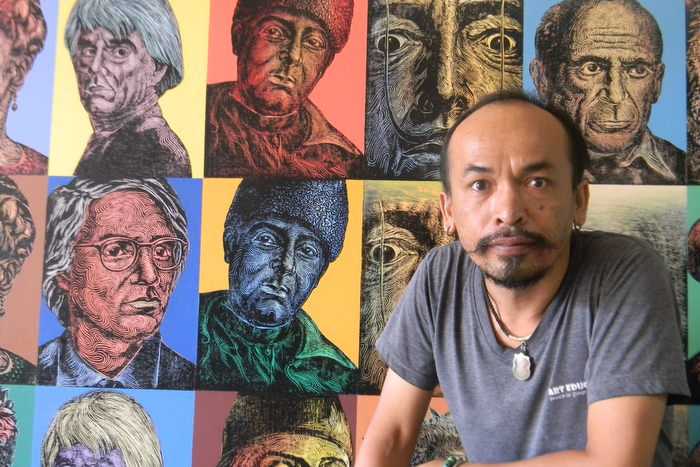 PHUKET: Monthian Yangthong is one of Phuket’s most talented artists, known for his ability to create art using a variety of mediums.

Currently, one of his collections – a series of woodcuts of the faces of well-known Western artists – is on show at Boathouse by Montara.

“I find working with wood-cuts very interesting, as it’s possible to create a depth and intensity of feeling not possible with oil or acrylic paint,” says Monthian.

Monthian poses with one of his woodcuts, which depict the faces of world-famous artists. Photo: Supplied

“I believe I am the only artist in Southern Thailand working with woodcuts. I decided to create a series of the [faces of] 30 main Western artists who I think are the bridge between the classical and modern art worlds.”

Monthian grew up on a rice farm in the far southern region of Thailand. He graduated from the Prince of Songkla University Pattani campus with a degree in art education.

“Though my father was a rice farmer, he influenced me to give a Buddhist focus of detail to my drawings as a child. He encouraged me in my development as an artist,” Monthian recalls.

Monthian has a gallery and studio at 29 Phang Nga Road in Phuket Town, where he displays his talents in various mediums.

Many of his paintings pay homage to his love of the natural country life of rural Thailand. But for his current show at Boathouse, he decided to venture in a new direction with his woodcuts.

“I think Paul Cezanne was the inspiration of modern art. I have made colorful woodcuts of many of the Impressionists, [from] Salvador Dali to Andy Warhol,” says Monthian.

“I start with a black and white field and then add color. I concentrate on what I feel to be the spirit of the artist I’m creating.”

Monthian feels that the lines created by the woodcut process relate to the Buddhist concept of “sen”, or lines of energy that flow through the body.

He even makes the frames that surround his work, as his aim is to create a complete piece of art based on his lifelong Buddhist ideals.

Monthian Yangthong’s show, called World Artists, will be on display at Boathouse at Montara until the end of the year.