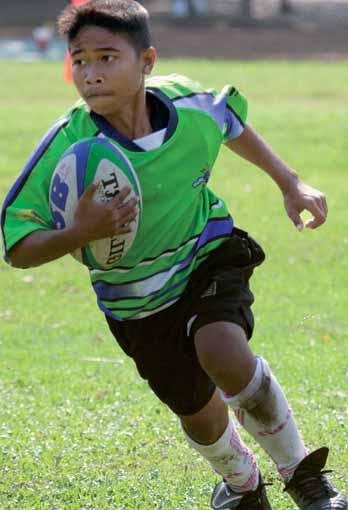 PHUKET: The Rugby World Cup 2011 takes center stage in September when 20 countries will battle it out to lift the Webb Ellis Cup.

Before that, however, another rugby tournament will take place – one of far greater importance to a group of Phuket youngsters.

Ten lucky players from the Phuket Lomas Under-13 team have been chosen to represent their club, island and country at the prestigious Touraid Cup, taking place in the UK in June.

The annual rugby festival brings together underprivileged children from 10 countries to play in a 10-a-side rugby tournament.

Manchester has been chosen as the host city for 2011.

The Lomas players travelling to the UK all come from underprivileged backgrounds and have never previously been outside Thailand. Although Touraid is paying for the flights and visas, the Lomas Rugby Club is looking for new sponsors to help fund the trip and a new playing kit.

As part of the tour, the Lomas youngsters will be asked to help with various community projects alongside children from a host school.

The event is the brainchild of the charity’s CEO Andy Berry, who five years ago came up with the idea of bringing communities together and giving opportunities for disadvantaged kids to travel to the UK to play rugby.

Mr Berry believes the week-long Touraid festival is invaluable for the children involved and thinks the event can only help to broaden rugby’s appeal around the globe.

Visiting children will experience new friendships and many at the host schools will obtain an insight into the lives and circumstances of others who are less fortunate and culturally different.

Top English Premiership rugby clubs will provide the Phuket Lomas and the other touring teams with coaching, helping children improve their rugby skills.

The Touraid Cup annually receives plenty of media coverage in the UK, including daily reports on the BBC.

Mr Cotter told the Phuket Gazette the kids are very excited about the prospect of touring overseas.

“They can’t wait to go. Unfortunately only 10 children can travel, so many will miss out, but we hope to have other opportunities for these kids to go overseas in the future to train and gain experience,” he added.

PHUKET NIPPLE ALERT: Staying abreast of nude on our beaches