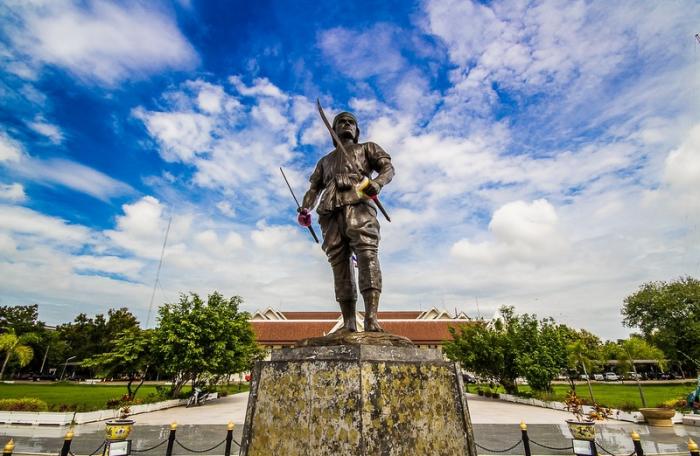 PHUKET: Picking up from where I left off in part one of the history of Thong Dee, in 1765, the Burmese invaded Siam with the aim of crushing Ayutthaya. King Ekkathat tried desperately to defend his country from the invaders.

When Ayutthaya came under siege, the king sent word to Phraya Taksin for assistance. Taksin assessed the situation and believed that his efforts would prove futile. The general led five hundred of his best fighting men and their commanders, including Luang Pichai Asa out of the city and made sure they were not detected by the enemy.

By this time Luang Pichai Asa had become known for his characteristic fighting style, holding a pair of swords, one in each hand. His company consisted mostly of Chinese fighters. When they managed to break out of the Burmese siege, Taksin’s small but loyal band of fighting men began to travel east.

When the Burmese realized that they had let Taksin and his men escape, they sent an army in pursuit. The two forces clashed at Pho Sao Harn, which would be one of the first times that the Burmese would learn of the general’s ferocity. Taksin’s forces smashed the pursuing Burmese forces, routing them completely and seizing many of their weapons.

After the battle, Taksin’s army set up camp near a village called Ban Phran Nok on the western banks of the Chao Phraya River. While in search for food, a company of Siamese soldiers came across more Burmese troops who were searching for them. The Siamese managed to retreat back to their camp, but the Burmese followed.

Taksin organized his men to defend the camp. He sent his trusted cavalry commanders out to lure the Burmese army into an ambush. The Burmese attacked the Siamese cavalry. The cavalry pretended to retreat as planned. The Burmese, confident that it was their day, followed and were caught in Taksin’s ambush. They were surrounded and slaughtered mercilessly.

Taksin’s early victories against the Burmese gave the Siamese people renewed hope. Fighting men from nearby villages began to flock to his camp.

Taksin continued to move east, away from the Burmese stronghold. He knew that his forces were still not strong enough to attack the Burmese and win. He needed more men and the only way was to get help from the Siamese governors of the eastern towns, which had escaped the Burmese onslaught during the invasion of 1766.

But when Taksin’s army reached Nakhon Nayok, he once again received distressing news. An army of Burmese fighters was closing in on him fast. He had no time to set up his defenses so Taksin decided to use the geography of the area to his advantage. He placed his musketeers in the tall grass where they would be hidden from the enemy. General Taksin, Luang Pichai and a handful of his trusted cavalry then rode out to meet the Burmese army.

They clashed once again on the plains. Again Taksin and his cavalry pretended to rout. The Burmese chased them with renewed impetus. Taksin led them straight into his trap. Once they were in range of the hidden gunmen, the muskets fired. Round after round, the Burmese army was cut down. The Burmese reserves, unable to communicate with the rest of the army, marched in as well and were indiscriminately gunned down by Taksin’s musketeers. By the end of the day, hundreds of Burmese soldiers lay dead on the battlefield. General Taksin was once again victorious.

Since that battle, the Burmese did not send anymore of their men in pursuit of Taksin. The general continued to march east, passing Chachoensao, Banglamung, eventually reaching Rayong. The governor of Rayong, upon seeing Taksin, welcomed him into the city. He offered his troops to Taksin’s service.

But there were a few nobles of Rayong who did not agree with the governor’s decision to assist Taksin. They believed that if the governor of Rayong helped Taksin, the Burmese would not spare their city. Eventually they would follow Taksin eastwards and crush his rebellion and all the cities that assisted him would be razed to the ground.

The nobles gathered and plotted to get rid of the general. But once again, news of their plot reached Taksin. That night, a sizeable army led by a few of the conspirators surrounded Taksin’s camp. They shouted and made loud noises to intimidate Taksin’s men.

Taksin, anticipating an attack, ordered his men to stand down. Seeing the camp dead quiet, the nobles ordered their men to attack. The men charged at the camp. But when they were just a few yards away, Taksin’s musketeers began to fire. The first line of attackers fell instantly. Luang Pichai then emerged from the camp at the head of fifteen men and charged into the confused ranks.

The army broke and routed. Luang Pichai managed to capture the conspirators, cut off their heads and throw them at Taksin’s feet that same night. Taksin was very impressed by Luang Pichai’s bravery and compared him to the likes of Phraya Siharat Decho, a legendary general in service of King Narai during the Ayutthaya period. That night, the town of Rayong was undoubtedly his for the taking.

Blazing Saddles: When in Phuket, do as Brisbane does

Excuse Buster: Effects of cortisol on your body