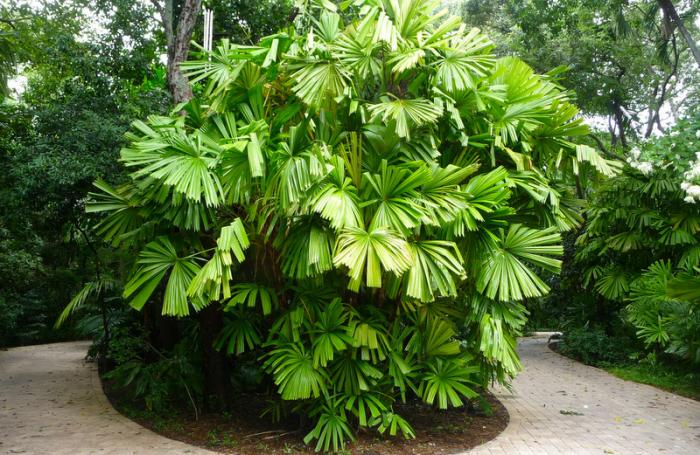 PHUKET: When I was a boy I had to endure long waits on sooty railway stations – yes, it was the age of steam – whose walls were plastered with gaudy and incongruous posters of seaside resorts with azure seas, golden sands, bronzed maidens and palm trees. Of course, no beach in the UK actually looked remotely like that, and it was only years later that I glimpsed my first grove of real palms as I drove a rickety car across southern Spain.

With global warming, things have changed – there is now a licuala spinosa palm not a hundred yards from my London apartment. But palms remain quintessentially tropical trees, not only graceful additions to almost any Phuket garden, but among the easiest trees to grow. The range is simply vast. One collector in Thailand, I recently read, has no fewer than 90 different licuala palms.

And when you consider that the family of fan palms is only one genus – and that at least 15 of these are native to Thailand, you begin to appreciate the enormity of the task of classifying palms in general.

Fan palms are a good choice for the small garden since they rarely grow more than a few feet tall, and are neat and compact in habit. Mostly a lustrous shade of green, they boast huge, semi-circular leaves which are either divided into segments, or are pleated like the folds of a concertina. In the wild – and species are still being discovered – they are usually found around the margins of swamps or in rain forests. In cultivation they have great potential, not only as landscape subjects in the garden, but also as pot plants. Slow-growing, fan palms prefer part shade and a well-drained, friable, but moist soil.

You can try them indoors, but like all houseplants, they will need periodic relief from indoor conditions. Outdoors, they require a sheltered spot with protection from strong winds, which will play havoc with their sail-like leaves.

Spinosa, an Asian variety sometimes found growing wild near native river banks, is bigger than most, with large roundish leaves divided into square-ended segments, and attractive pendant clusters of red fruit. Grandis, also known as the ruffled fan palm, has pleated leaves on a single stem.

Johannesteijsmannia altifrons – which must hold the record for the most unpronounceable plant name, is generally classified as a separate species, but it resembles a fan palm with its broadly diamond-shaped foliage and glossy, undivided leaves up to five feet across. It deserves to be better known, and it is gaining in popularity.

Much more mundane, but exceedingly useful is the rhapis or lady palm. Usually planted in clumps – although it can be purchased singly – it has slender trunks covered with fibrous hair, and distinctive fan-shaped leaves, divided into separate leaflets. Capable of enduring dense shade, rhapis will do well in most conditions provided it has adequate moisture at its roots. Deprived of water, some of the fronds will turn brown. Growing to about two meters, rhapis is useful both as a dense screening hedge and for providing lush green cover under taller shrubs and trees.

If you have gardening or environmental concerns, contact Patrick at drpaccampbell @gmail.com. Many of his creative and academic publications can be found at his website: Green galoshes WordPress.