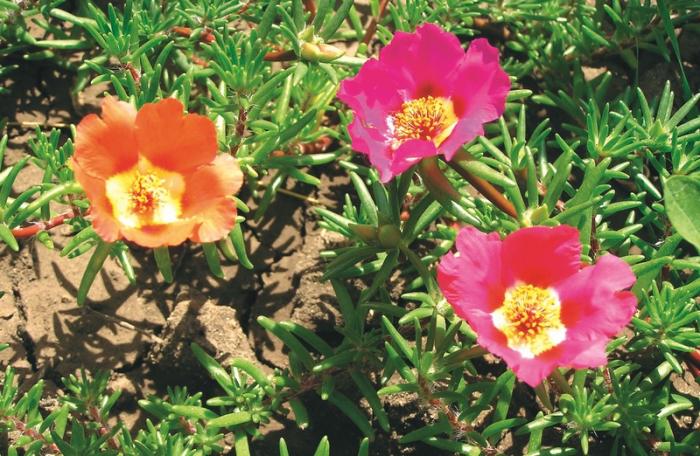 PHUKET: Some bedding flowers can be cultivated as annuals or perennials. It all depends on such imponderables as the climate or the whim of the gardener. Take begonias. They will not tolerate frost, so in temperate zones, if you intend to keep them for more than one season, they need to be brought indoors during the cold weather. For this reason, begonias are deservedly popular in the United States and the UK, where they grace summer flower beds and hanging baskets, or spend winter indoors in pots.

The genus is huge; at least 1,500 species, most of which are tropical. In the wild, begonias are small, understorey plants needing filtered shade and well-drained but not dry soil. The most popular variety is semperflorens, which as its Latin name implies, flowers more-or-less continuously, and which can be further subdivided into fibrous, wax and ever-blooming varieties. The flowers are small, but profusely produced in shades of pink, red, cream or white – invariably with a bright yellow center or eye.

By way of contrast, the deeply-veined leaves are predominantly dark green with a triangular shape reminiscent of caladiums. And like caladiums, begonias are often grown primarily for their foliage, especially begonia rex, which hails from Assam, and erythrophylla which has deep purple leaves. Propagation is by division or stem cuttings. And a real bonus: begonias are immune to most insect and fungal attacks.

More likely to catch the eye in Phuket is the portulaca. Unlike the begonia, which will need some cosseting, the portulaca or ‘moss rose’ is drought resistant; requiring little in the way of water and nutrients. Its succulent stems and needle-shaped leaves are primed for desert-like conditions.

Portulacas are even lower to the ground than begonias – no more than eight inches tall – so they can be used as ground cover. But the real joy is the dramatic, cup-shaped flowers, which come in vibrant hues of red, magenta, orange, yellow and white. They burst into bloom whenever the sun caresses. Because of their immunity to drought, portulacas can be grown in crevices and on rockeries. And they grow readily from seed, though nurseries normally carry some in small pots.

Two other annuals and perennials worth thinking about are rudbeckias and gazanias. Both are daisy-like and belong to the asteraceae genus. They enjoy full sun and are both mainly yellow in color. They don’t need much maintenance.

Rudbeckia fulgida comes in several varieties, of which the longest lasting is the hybrid ‘Goldsturm’, which has russet and mahogany tones. But the best known rudbeckia is the one with yellow-gold petals and a black center, popularly known as ‘black-eyed Susan’. While the hairy leaves are not a plus point, rudbeckias make good cut flowers. Normally about one and a half feet tall, there is one variety, maxima, which rivals the sunflower for size and can produce five-inch blooms on nine-foot stems.

Gazanias or treasure flowers do not reach such heights. Like begonias, they are usually six to twelve inches tall, though the flowers normally rise above the foliage. Coming from South Africa, they can stand plenty of direct sun. In some ways they are better bedding plants than the rudbeckias.

For a start they come in a broader palette of colors – pink, white, and red as well as the traditional yellow and orange. Moreover, the leaves are attractively notched. In some hybrids, notably ringens, they are a pleasing silver-grey hue. In the right conditions they will quickly cover the ground with a dense mat. But they may struggle in Phuket’s monsoon weather, for they dislike hot and humid conditions.

They are worth a try nonetheless – if you can find them. But if the plants are not available, packets of seed most certainly are.

If you have gardening or environmental concerns, contact Patrick at drpaccampbell@gmail.com. Many of his creative and academic publications can be found on his website: Green galoshes Wordpress.