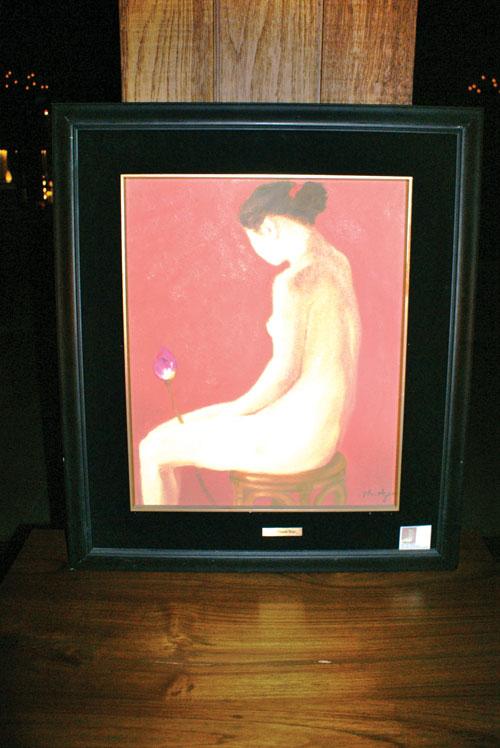 PHUKET: Michael Earle, the former architect turned magazine publisher behind the popular Phuket-based Think Design magazine, is a one-man army when it comes to promoting good design and art on the island. His art dinners have become a Phuket institution for local art aficionados who want to take their dining experience to a new level.

Having recently had the chance to attend one of Michael’s art dinners, it was immediately obvious why they are often fully booked – who wouldn’t want to enjoy a fantastic meal while being exposed to new art by a knowledgeable and eloquent guide such as Michael?

The concept behind them is deceptively simple. Find six art pieces and ask a chef to use them as inspiration to create a six course menu but this simple idea gives rise to complex new dishes as the two artists interact, one using paint and the other using food.

“The idea is something that I call cross pollination, you have one artist inspiring another and it leads to something even better. It’s happened throughout the history of creative art and its something that will continue to happen,” explains Michael.

He has held art dinners at many of the top resorts and restaurants such as Andara, Le Meridian and Centara Grand and this time it was the turn of Vero, one of the newest restaurants on the island, at the Pullman Arcadia Resort on Nai Thon Beach.

This constant mixing of different artists with different chefs means that no two dinners are ever the same and many guests have been regularly attending them for years knowing that they are always going to get something new and exciting.

It wasn’t Vero head chef Flavio Manzoni’s first time at an art dinner. He has attended them as a patron to see what culinary creations other top chefs have come up with when using art for inspiration. It was, however, his first time cooking at one, and he said he was excited by the challenge.

“It was a very interesting process. It really depends on how you interpret the paintings and what you feel about them,” he said.

His dishes where inspired by a selection of paintings by some of top Vietnamese artists working today and he said it inspired him to incorporate some Asian elements into his repertoire of Northern Italian style cooking.

“I tried to use some local elements, with a really Italian taste to combine East and West,” he said.

Again the format of the night was simple: as each dish was served, a new painting was displayed and Michael spoke about the artist, their background and approach to painting before discussing how chef Flavio was inspired by various elements of each painting when creating the dishes.

Each dish was delicious, but a particular highlight was the pumpkin veloute with organic beetroot, a thick yet silky smooth pumpkin soup with a dollop of pureed roast beetroot providing a rich earthy flavor. The potato pearl dumplings with Alaskan crab were also divine. With a coconut based sauce covering the gnocchi-like dumplings and morsels of crab meat, providing a perfect example of Flavio’s East meets West approach.

A refreshing and tangy tamarind and orange sorbet was an interesting way to punctuate the larger courses and was soon followed by the outstanding main course of super-fresh wild salmon and langoustine in a citrus olive oil emulsion.

As we were enjoying these fabulous dishes, I struck up a conversation with one of my fellow diners and discovered that he had been coming to almost every one of Micheal’s art dinners since they began. To inspire such a loyal following, it’s clear that Michael has found the recipe for success. I know I’m certainly looking forward to the next one.

A true taste of Phuket