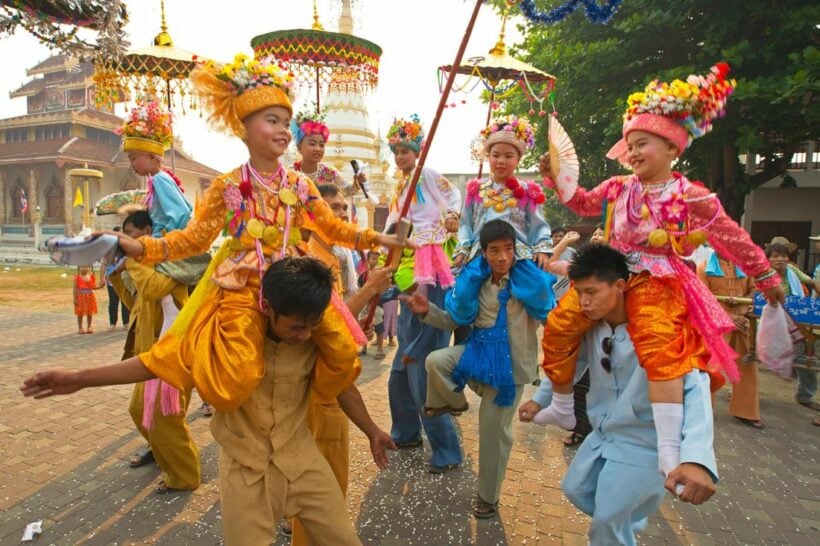 Fireworks, colour, smoke, noise, costumes, absence of occupational health and safety. That could describe any of the many, many festivals held around Thailand each year. Different regions, different festivals. Some reflect an ancient culture and a rich history, other make absolutely no sense but we enjoy them anyway. We’ll go through some of the main ones and a few you’ll NEVER see anywhere else in the world.

We’ll start with Songkran because that’s the start of the Thai new year. It’s held on April 13. Having already blown most of the budget on fireworks for the western new year on January 1 and the Chinese New Year festivities, this time they use water as a means of ‘purification’, saying goodbye to the country’s hot season and welcoming the monsoonal rains. It involves a lot of water. In the past it was a gentle festival held at temples washing Buddha images. 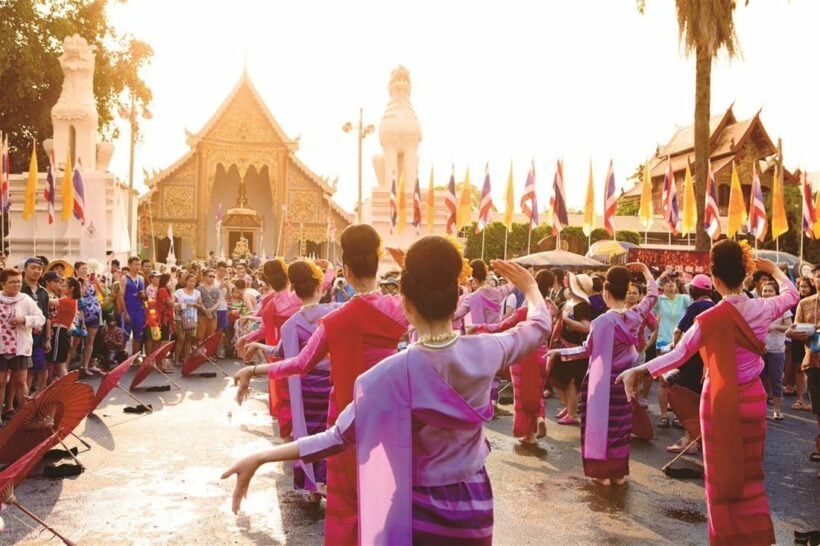 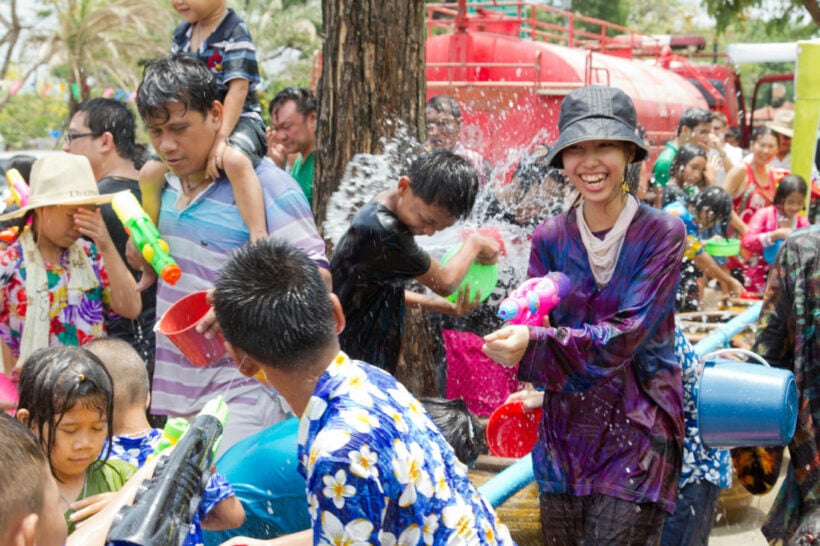 Somehow it’s morphed into a huge water fight, in some places, running over many days up to week (in Chiang Mai and parts of Pattaya). Ladeling water gently onto Buddha statues has been replaced by all-out water fights, loud music, foam and a party that has no rules.

If you’re outside during Songkran, especially in the main tourist zones, you WILL get splashed, probably drenched. The more the authorities try and play down the fun in Songkran the more tourists arrive each year determined to party in an event that’s somewhere between a video-game and the last half of ‘Titanic’.

And that’s just ONE festival! 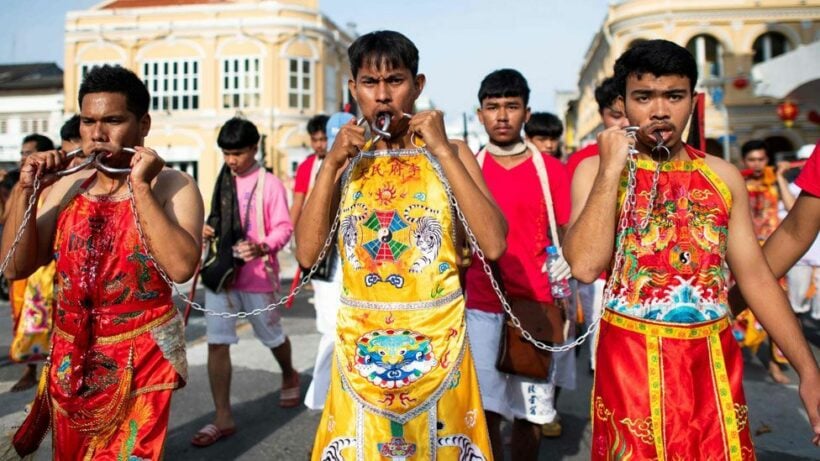 The Vegetarian Festival, principally held in Phuket with it’s Chinese heritage, is an assault on all your senses. Parades are held around the island by various community groups with participants wearing white and followed up by either one or many mah-song. These mah-song have been ‘possessed’ by a spirit and display tourettes-like ticks, grunts and choreography that suggests their claims may indeed be true. If it’s all an act, it’s a very convincing one because, apart from all the cavorting down the street, they also have their cheeks and other parts of their body pierced – not by an earring or something tame like that – we’re talking spears, swords, petrol pumps, guns. It’s insane! These days there’s an ambulance following behind and probably more mah-song succumb to blood loss than is ever reported. 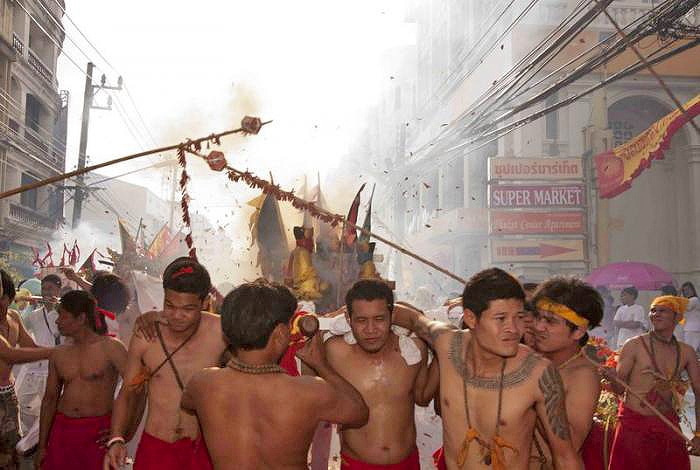 Phi ta khon (or Ghost Festival) is held in the Dan Sai district of north-eastern Thailand (near the Lao border) each year and usually follows a parade of people dressed up in rags with ghost masks.

Phi Ta Khon is the name given to a group of celebrations held over three days in the province of Loei. The most striking is the first day, the Ghost Festival itself, when the town residents invite the protection of the river spirit Phra U-Pakut, and then parade wearing the ghosts masks made of husks and coconut leaves.

But they also carry with them large phallic axes which are meant to reflect… oh, Google it. 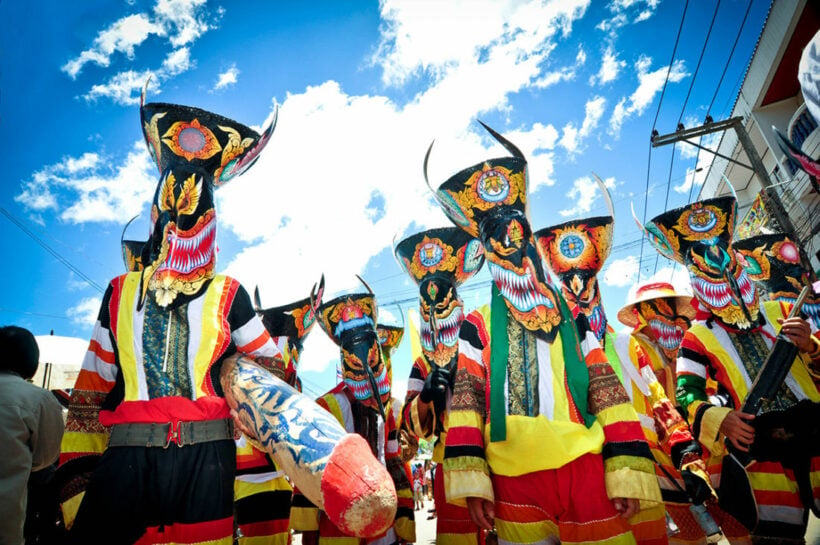 In Esan and around the Laos border areas there are many rocket festivals each year around May to June. Probably the biggest is the Yasothon Bun Bang Fai Rocket Festival. Imagine groups building their own rocket with the winner able to fire their rocket to the highest altitude. Like Songkran, the idea is to welcome in the forthcoming wet season (by piercing the sky to encourage rain).

The rockets used to be made out of bamboo but are more likely to be constructed out of PVC pipes these days and powered by ‘black powder’ which is regulated by certain rules (we doubt this claim!!). So there’s gun powder, loud music, alcohol and men in competition to fire home-made rockets high into the Esan sky – what could possible go wrong?! Some of the rockets reach heights of several kilometres and can travel a lot further down range. 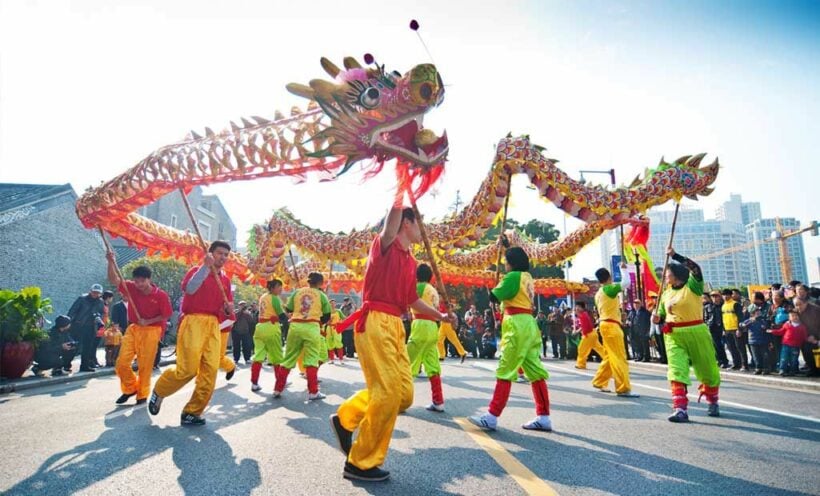 I have never seen better decorations or a celebration of Christmas than I have in Bangkok. My best Christmas moment was when I found a statue of Santa Claus nailed to a cross – a slight cultural faux pas where they’d confused Easter and Christmas and come up with a perfectly ‘Thai’ Christmas decoration. Thai developers revising strategies after a drop in Q2