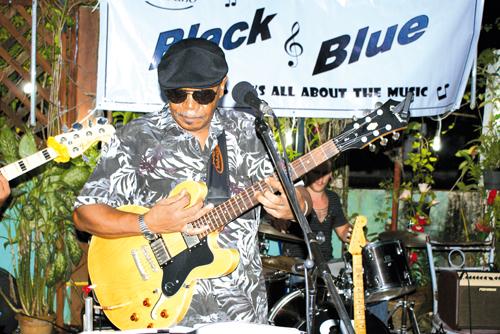 PHUKET: You would think a great blues band would have its name rooted in some great emotional torment, a bruised heart or tragic love story. Soulful expat blues musicians Black & Blue, however, chose their name based on their stage outfits.

“That was my idea,” rhythm guitarist Peter explains. “We were talking about how we were going to dress for the stage – we were going to wear all black, but that seemed a bit too much, so we went for blue shirt and black pants or blue pants and a black shirt.”

“Actually, lead guitarist Rob cuts in, “the reason for the blue shirt is that Peter has nothing but blue shirts.”

The five-piece band laughs easily together.

“That’s right,” Peter grins. “Our name came from the wardrobe.”

“Richard was asked to put together a blues band for a local club,” Peter explains, nodding toward the band’s singer/guitarist/flautist.

“So he called me and talked to Rob, and over a couple of months we worked on this act. It didn’t work out at that club, but it’s worked a lot of other places. The chemistry was good so we thought, let’s keep going.”

So, that’s just what they did.

At a gig last week at the Welcome Inn in Layan, patrons danced and bobbed along happily to the blues crew’s mix of down-home, twelve-bar and soulful rock, made all the more enjoyable thanks to Black & Blues‘ intuitively tight musicianship.

Setting up the beat is Jamie on drums. “I only got into the blues at the beginning of last year. I’m the young pup of the group,” he grins. “Before that I was into rock and punk.”

Bass player Boy pushes the rhythm along.While Boy lays down the low notes, Peter fills out the middle, and Rob puts the electric tingle on the top.

But at the heart of the band – though he is loathe to admit it – is Richard. A true old school bluesman, Richard still happily recalls his blues roots in New York. “At 15 years old, I was sitting on steps playing my harmonica along with Jimmy Reed. I just grew up with the blues.”

Richard retired to Phuket after a life as a merchant seaman. “I was really amazed to find so many classy, talented musicians here,” he smiles, looking around at his band. “It’s just a wonderful place to be for the music.”

And, as the whole band happily agrees, “It’s all about the music!”

You can hear Black & Blues live at the Green Man, Chalong, on June 28 from 8pm onward (click here for map), and again on July 6 at the Phuket Family Picnic and Airshow at Phuket Airpark in Pak Klok (click here for details, and here for a map).