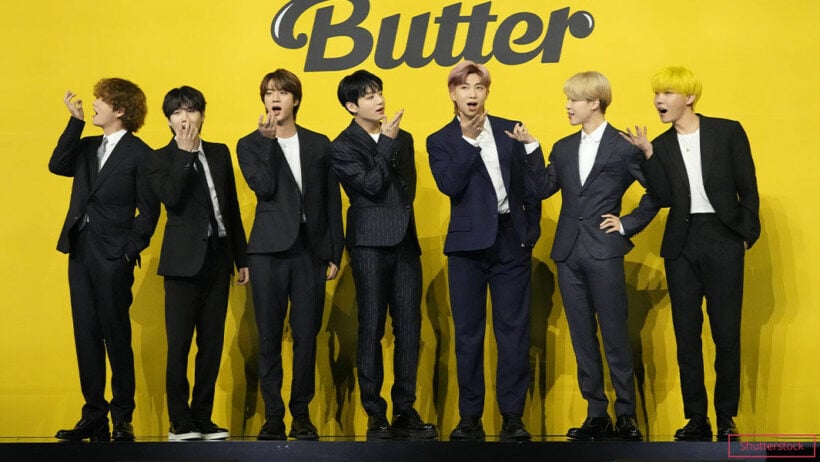 South Korean band BTS have made history again with ‘Butter’, topping Billboard’s Hot 100 singles chart this week… the 4th #1 hit from the 7-member BTS on Billboard’s Hot 100 Singles chart in 1 year, following ‘Dynamite’ and ‘Life Goes On’, and their collaboration on the ‘Savage Love’ (Laxed – Siren Beat) remix with Jawsh 685 and Jason Derulo. Only 6 other musical acts have ever reached that record.

Next week they will celebrate their 8th anniversary since they debuted in June 2013 as an unknown hop-hop try-hard band as part of South Korea’s highly competitive K-Pop genre.

BTS are the first group to have 3 singles debut at #1 on the chart, and have accumulated the most amount of #1 hits over a period of 9 months since Justin Timberlake did the same in under 8 months back in 2006. For a band, it’s the fastest that any group has achieved 4 #1 hits since the Jackson Five did it in 1970. And most of their music is sung in Korean.

Only a handful of acts… The Beatles, The Supremes, Mariah Carey, Paula Abdul, The Jackson 5, Justin Timberlake and now BTS, have ever reached this musical summit.

‘Butter’ takes over the top spot from Olivia Rodrigo’s ‘Good 4 U’.

BTS took to social media to thanks their legion of fans called ARMY. The band members, RM, Suga, Jimin, J-Hope, Jungkook, V and Jin got up early yesterday morning to celebrate the milestone.

“We released ‘Butter’ to bring a fun song that anyone can enjoy. We’re happy and honoured that the song reached #1 on the Billboard Hot 100 again. We wouldn’t have got our 4th chart-topping song without everyone’s love and support. Thank you for enjoying ‘Butter’ and we will keep working hard to deliver refreshing and passionate music.”

‘Butter’ also smashed the band’s own record on YouTube becoming the highest number of views in 24 hours, with 113 million views.