US President Donald Trump has been impeached for “incitement of insurrection” relating to last week’s Capitol Hill insurgency. Armed National Guard troops guarded both the inside and outside the Capitol building following the riotous mob that invaded the hallowed halls of America’s democracy, almost precisely one week before the impeachment vote.

Wednesday afternoon, Washington DC time, the US House of Representatives voted to impeach the President by 232 votes -197 votes. Donald Trump is the first president in the US to be impeached twice. Notably, 10 Republicans crossed the floor to vote with the Democrats to support the impeachment vote.

House Speaker Nancy Pelosi said ahead of the vote… “We know that the president of the United State incited this insurrection, this armed rebellion, against our common country. He must go. He is a clear and present danger to the nation that we all love.”

President Trump will now face a formal trial in the US Senate. If convicted he will face being barred from holding executive office ever again. With less than a week to go before President-elect Joe Biden takes over as the next president, the Senate won’t have time to reconvene. So the trial will be undertaken by a Senate controlled by the Democrats.

President Trump was defeated in the election on November 4, 2020, losing to to Democrat Joe Biden.

Shortly after the vote to impeach him President Trump released a video (below) calling on his followers to “remain peaceful”. He also broadly mentioned his banning from Twitter, Facebook and YouTube, among other social media platforms, but didn’t refer to the impeachment proceedings or show any contrition to his alleged role in inciting the rioters over the past 2 months since the presidential election.

“Violence and vandalism have no place in our country. No true supporter of mine would ever endorse political violence.”

The President read the prepared speech in a calm tone and avoided his usual rancorous rhetoric.

The president was accused by the US Congress of inciting the storming of the Capitol with his January 6 speech to a huge rally of Trump supporters outside the White House. He urged his supporters to “fight like hell” against an election that he repeatedly told them had been “stolen”, a similar message he had been falsely claiming since the election. His supporters then marched to the Capitol, broke into the building, forced lawmakers to suspend the certification of the Presidential election results and seek shelter. Five people died in the melee and many more were injured in the violent insurgency.

The impeachment charge is political, not criminal. The articles read that Mr Trump “repeatedly issued false statements asserting that the presidential election results were fraudulent and should not be accepted”. It says the President then repeated these claims and “wilfully made statements to the crowd that encouraged and foreseeably resulted in lawless action at the Capitol”, leading to the violence and loss of life.

Donald Trump now makes history as the first US president to be impeached twice. A year ago, the move was opposed  by the Republican Party in the Senate. This time, a handful of conservatives backed the move. The falling out with some members of his own party and senior staff, and Senate majority leader Mitch McConnell’s private support for the impeachment, is indicative of the President’s declining influence in the fading light of his administration.

Mr McConnell said in a note to colleagues that he had not made a final decision on how he would vote in the forthcoming Senate debate. No US president has ever been removed from office through impeachment. Mr Trump was impeached by the House in 2019 but acquitted by the Senate. Same with Bill Clinton in 1998 and Andrew Johnson in 1868. 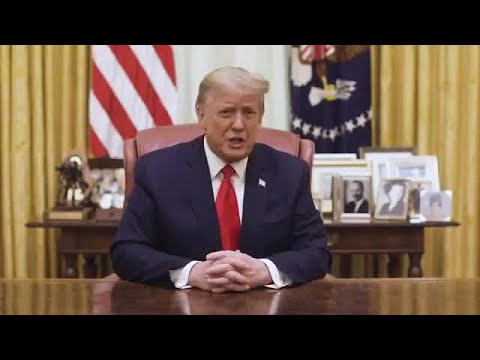