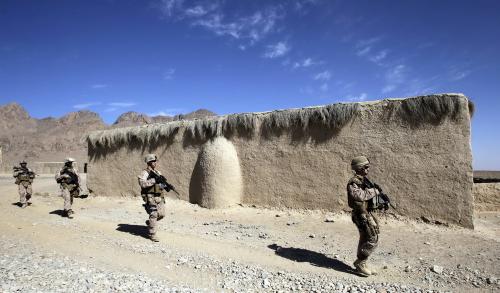 PHUKET: The Obama administration does not rule out a complete withdrawal of US troops from Afghanistan after 2014, the White House said yesterday (January 8), just days before President Barack Obama is due to meet Afghan President Hamid Karzai.

The comments by U.S. Deputy National Security Adviser Ben Rhodes were the clearest signal yet that, despite initial recommendations by the top military commander in Afghanistan to keep as many as 15,000 troops in the country, Obama could opt to remove everyone, as happened in Iraq in 2011.

Asked about consideration of a so-called zero-option once the NATO combat mission ends at the end of 2014, Rhodes said: “That would be an option that we would consider.”

Rhodes made clear that a decision on post-2014 troop levels is not expected for months and will be made based on two US security objectives in Afghanistan – denying a safe haven to al Qaeda and ensuring Afghan forces are trained and equipped so that they, and not foreign forces, can secure the nation.

In Iraq, Obama decided to pull out all US forces after failing in negotiations with the Iraqi government to secure immunity for any US troops who would remain behind.

The Obama administration is also insisting on immunity for any US troops that remain in Afghanistan and that unsettled question will figure in this week’s talks between Obama and Karzai and their aides.

“As we know from our Iraq experience, if there are no authorities granted by the sovereign state, then there’s no room for a follow-on US military mission,” said Douglas Lute, special assistant to Obama for Afghanistan and Pakistan.

Jeffrey Dressler, an Afghanistan expert at the Washington-based Institute for the Study of War who favours keeping a larger presence in Afghanistan, questioned whether the White House comments might be part of a US bargaining strategy with Kabul.

“I can’t tell that they’re doing that as a negotiating position … or if it is a no-kidding option,” Dressler said. “If you ask me, I don’t see how zero troops is in the national security interest of the United States.”