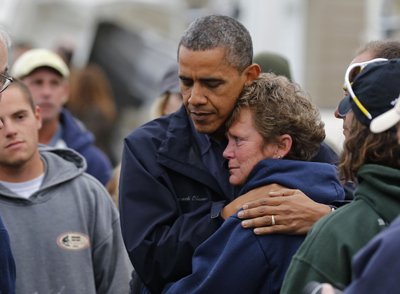 President Barack Obama and Republican Mitt Romney are neck and neck in four of the most hotly contested states in next week’s election, but Obama holds a slight advantage in two of them, according to a Reuters/Ipsos poll released yesterday.

The online survey of four battleground states showed Obama leading by 3 percentage points in Ohio and 2 points in Virginia. The two are dead even in Florida, and Romney leads by 1 percentage point in Colorado.

The state-level polls do not show a clear advantage for either candidate in any of those states going into Tuesday’s election, as each race falls within the poll’s credibility interval, the tool used to account for statistical variation in Internet-based polls.

But taken together, they indicate that Obama holds a slight edge in the state-by-state battle to rack up the 270 electoral votes needed to control the White House.

Since many of the largest states are considered solidly Democratic, Romney needs to win most of the nine or so states that are considered to be truly competitive in the election.

For Romney, winning the White House without winning Ohio will be difficult, and Obama leads there by 48 percent to 45 percent among likely voters. That margin is just within the survey’s credibility interval of 3.8 percentage points.

“That’s enough of a difference to give him an edge, if not a decisive lead,” Ipsos pollster Julia Clark said.

In Florida, the two are tied at 47 percent each.

Colorado is the only state in which Romney holds a lead, by 46 percent to 45 percent, well within the credibility interval of 4.1 percentage points.

“These are swing states because the vote is always very, very close. They all went Democratic in 2008, they all went Republican in 2004 and they’re on the knife’s edge right now,” Clark said.

NECK AND NECK AT NATIONAL LEVEL

Nationwide, Obama leads Romney among likely voters by a statistically insignificant margin of 47 percent to 46 percent, the online survey found. The numbers were unchanged from Tuesday and neither candidate has held a clear lead since early October.

Gallup and several other polls have suspended activity since Monday because of Hurricane Sandy, which left millions without power along the East Coast, but Clark said she saw little evidence the disaster had affected the four-day survey’s results.

“Our numbers haven’t gone strange on us,” Clark said. “We’re still getting interviews from those areas.” Ipsos has monitored response rates and not seen a significant difference due to Sandy, she said.

Some 24 percent of those surveyed nationally said they had already cast their ballots, providing further evidence that early voting will play a larger role than ever in the election. Among those who had not yet voted, a quarter said they planned to cast their ballots before Election Day.

Obama led Romney by 53 percent to 41 percent among the 1,660 respondents who said they had already voted.

Although the race remains tight, 52 percent expected Obama to win. Only 30 percent said they thought Romney would win.

The state polls showed Democratic candidates in Ohio and Florida leading by wider margins than the presidential race.

The Reuters/Ipsos database is now public and searchable by clicking here.