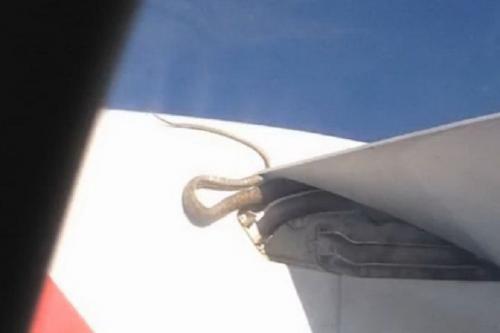 PHUKET: (News Wires): Qantas had its very own dramatic ‘snakes on a plane’ episode yesterday (January 10) when a three metre python joined passengers onboard an early morning flight from Australia to Papua New Guinea.

But unlike Samuel L. Jackson’s 2006 fictional Hollywood blockbuster in which a nest of vipers cause death and destruction onboard a jet, this reptile was only concerned with its own self preservation.

QF191 was approximately 20 minutes into its morning flight from Cairns to Port Moresby when a woman suddenly spotted the snake on the wing of the plane.

One passenger who witnessed the commotion said there was no panic on board.

“We were all stunned by what we were seeing,” the witness told reporters.

“I felt quite sad for it really. For the remainder of the flight, he was trying to pull himself back into the plane – even though he was fighting against 400kmh winds. The cabin crew told us that at cruising altitude, it was minus 12 degrees outside there – but not even that was able to finish him.”

According to passengers both pilots took it in turns to visit the rear of the plane and watch on with passengers as, several times, the snake somehow hauled itself back to safety, only to get dragged out again.

The president of the Australian Licensed Aircraft Engineers Association, Paul Cousins, said: “It appears as though the snake has initially crawled up inside the landing bay, maybe housed himself in there, and then crawled into the trailing ledge flap assembly.

The python was still attached when the plane landed in Port Moresby but a Qantas spokesman said it was dead on arrival.