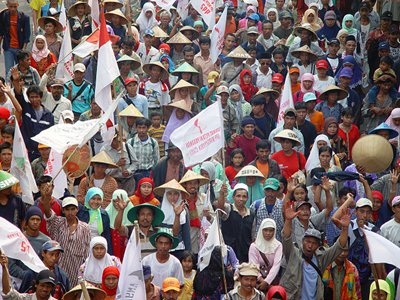 Ten more people sewed their mouths shut on Wednesday, joining other protesters who did the same on Monday and Tuesday. The protesters from “Communication Forum to Save Padang Island” are demanding the government revoke a permit issued for a paper company to clear forest which has been categorized as an industrial plantation.

Before Wednesday’s protest, eight people sewed their mouths shut on Monday and another ten did the same on Tuesday. Some of the protesters’ conditions have weakened because they have not been able to eat, according to reports.

House Speaker Marzuki Alie on Wednesday promised protesters that the House will request that the regional government solves the problem. “Don’t sew your mouths shut because you cannot eat or work and it’s useless,” he told the protesters, as quoted by the newspaper.

The group claimed the company Riau Andalan Pulp and Paper cleared land during its operation that has made local people worry about the possibility of erosion caused by deforestation.

Indonesia has one of the world’s fastest rates of deforestation. As the world’s third largest forest area – behind Brazil and Congo – Indonesia’s President Susilo Bambang Yudhoyono signed earlier this year a Presidential Instruction on deforestation moratorium to fight climate change impacts and preserve the remaining tropical forests and its biodiversity.

Padang Island is in the Riau province of Indonesia, and like Phuket produces palm oil and rubber among other commodities. Similarly it is also one of the richest provinces, however extensive logging has lead to a massive decline of forest cover from 78% in 1982 to only 33% in 2005 (Source: WWF).
Death toll reaches 11 after floods, landslide in Indonesia’s Central Java
Phuket Gazette

The death toll has risen to eleven after a flash flood and a landslide struck a small village in the Indonesian province of Central Java on Sunday, officials said on Tuesday.

The incident occurred on Sunday afternoon when a rain-triggered flash flood and a subsequent landslide hit the village of Tieng in the town of Wonosobo. The floods and landslide swept away at least thirteen houses and damaged 26 others and a community building.

Banjarnegara Regional Disaster Management Agency (BPBD) officer Andri Sulistyo told the Jakarta Globe on Tuesday that two additional male bodies have been found in the Mrica Reservoir, while three others were found floating near the Mrican Dam, bringing the total death toll to 11.

All of the bodies have been transported to the Kejajar Hospital in Wonosobo for proper identification by the Central Java Police Forensic team. However, the remains were damaged beyond recognition and tests would be carried out to identify them.

In addition, emergency workers have also recovered a part of a foot near the dam. Central Java National Search and Rescue Agency (Basarnas) member Aris Triyono said the foot does not belong to any of the eleven other victims.

Officials previously said 627 people have been displaced in the village, which has been seriously affected by the current rainy season.