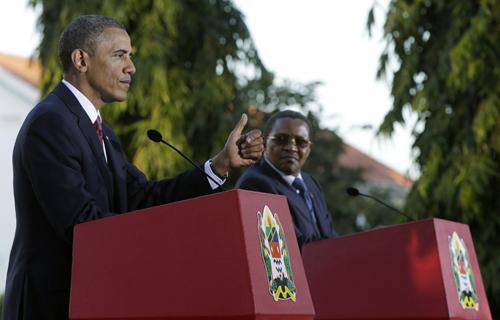 The EU has demanded that the United States explain a report in a German magazine that Washington is spying on the bloc, saying that, if true, such surveillance was shocking.

French President Francois Hollande called the alleged spying intolerable, saying it could hinder U.S. relations with Paris and the European Union. “We want this to stop fast,” he said.

Obama, on a visit to Tanzania, promised to supply all the information requested by European allies regarding the spying allegations, which he said Washington was still evaluating.

“If that weren’t the case, then there would be no use for an intelligence service. And I guarantee you that in European capitals, there are people who are interested in – if not what I had for breakfast – at least what my talking points might be should I end up meeting with their leaders. That’s how intelligence services operate.”

His secretary of state, John Kerry, who is in Brunei for an Asian security conference, said the United States was not alone in using “lots of activities” to safeguard its security.

Revelations about the U.S. surveillance programme, which was made public by fugitive former NSA contractor Edward Snowden, have raised a furore in the United States and abroad over the balance between privacy rights and national security.

The Guardian newspaper said on Sunday the United States had also spied on non-European allies, including Japan, South Korea and India – all represented at the Asian security conference.

Kerry confirmed that EU foreign policy chief Catherine Ashton had raised the issue when he met her in Brunei. He said he had yet to see details of the newspaper allegations.

“I will say that every country in the world that is engaged in international affairs and national security undertakes lots of activities to protect its national security and all kinds of information contributes to that. All I know is that it is not unusual for lots of nations,” Kerry told a news conference.

Several EU policymakers said talks on a U.S.-EU free trade deal should be frozen until Washington clarifies its activities.

“I was always sure that dictatorships, some authoritarian systems, tried to listen … but that measures like that are now practised by an ally, by a friend, that is shocking, if it is true,” Schulz said in an interview with France 2.

Officials in Japan and South Korea said they were aware of the newspaper reports and had asked Washington to clarify them.

Indian External Affairs Minister Salman Khurshid, who is also in Brunei, told ANI television: “These are all areas of great strategic importance that we have to cooperate and collaborate in, in counter-terrorism measures.

“I think we (the United States and India) continue to remain in touch and cooperate and (if) there is any concern we would convey it or they would convey it to us,” he added.


Investigators launch probe into death of 19 Arizona firefighters
Reuters / Phuket Gazette
PHUKET: Fire investigators in central Arizona launched a probe into how wind-driven flames closed in on and killed 19 specially trained firemen in a tragedy that marked the greatest loss of life among firefighters in a U.S. wildland blaze in 80 years.

The precise circumstances surrounding Sunday’s deaths of all but one of a 20-member elite “hotshots” firefighting team remained unclear a day after they perished while battling a blaze that has destroyed scores of homes and forced the evacuation of two towns.

But fire officials said the young men fell victim to a volatile mix of erratic winds gusting to gale-force intensity, low humidity, a sweltering heat wave, and thick, drought-parched brush that had not burned in some 40 years.

Peter Andersen, a former local Fire District chief who assisted in the early firefighting efforts, told Reuters some of the men on the ground made it into their shelters and some did not, according to an account relayed by a ranger helicopter crew flying over the area.

“There was nothing they (helicopter crew) could do to get to them,” he said.

Still, conditions faced by the “hotshots,” a ground crew that fights flames at close range with hand tools and serves as the shock troops in a firefighting force, were typical for the wildfires they are trained to battle, fire officials said.

Standard safety protocols followed by such crews appeared to be in place, and investigators are trying to determine exactly what went wrong in this instance, they said.

“It had to be a perfect storm in order for this to happen. Their situational awareness and their training was at such a high level that it’s unimaginable that this has even happened,” Prescott Fire Department spokesman Wade Ward told ABC’s “Today” program.

The blaze was ignited on Friday by lightning near the town of Yarnell, about 80 miles (128 km) northwest of Phoenix, and by Monday was still raging unchecked after scorching some 8,400 acres (3,400 hectares) of tinder-dry chaparral and grasslands.

Authorities ordered the evacuation of Yarnell and the adjoining town of Peeples Valley. The two towns are southwest of Prescott and home to roughly 1,000 people.

A Yavapai County Sheriff’s Office spokesman said on Sunday at least 200 structures had been destroyed, most of them in Yarnell, a community consisting largely of retirees. And fire officials said most of the building lost were homes.

Authorities on Monday said that figure was a rough estimate and that a more accurate assessment of property losses was expected later.

The so-called Yarnell Hills blaze was one of dozens of wildfires in several western U.S. states in recent weeks. Experts have said the current fire season could be one of the worst on record.

Sunday’s disaster in Arizona marks the highest death toll among firefighters from a U.S. wildland blaze since 29 men died battling the Griffith Park fire of 1933 in Los Angeles, according to the National Fire Protection Association.