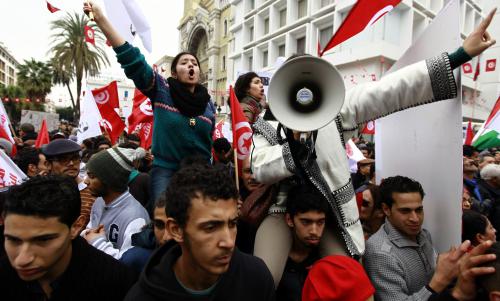 Just before the constitution’s approval, Prime Minister Mehdi Jomaa named a new caretaker cabinet appointed to ease a crisis between Islamists and secular opposition until new elections later this year.

Tunisia’s compromise and progress contrasts sharply with messy democratic transitions in Libya, Egypt and Yemen which are caught up in turmoil after ousting their own long-standing leaders in 2011 revolts and uprisings.

After their historic vote, the red and white Tunisian flag was unfurled and assembly deputies embraced each other inside the chamber in the capital Tunis.

One of the most secular countries in the Arab World, Tunisia struggled after its revolt with divisions over the role of Islam and the rise of ultra-conservative Salafists, who secularists feared would try to roll back liberal rights.

The assassination of two opposition leaders by Islamist militants last year pitched the small North African country into crisis with the ruling moderate Islamist party Ennahda under pressure to step down from secular opponents.

After months of protests and deadlock, Ennahda agreed late last year to step aside for a caretaker administration of nonpolitical appointments that would govern until elections.

Jomaa, an engineer and former minister appointed as premier in December, on Sunday named his cabinet with key posts given to technocrats with international experience.

Hakim Ben Hammouda, an economist with experience at the African Development Bank, was named finance minister and Mongi Hamdi, a former U.N. official, as his foreign minister.

“The objective is to arrive at elections and create the security and economic climate to get out of this crisis,” Jomaa told reporters.

No date has been set for elections but they will be held later this year with Ennahda and key opposition alliance Nidaa Tounes likely to battle for the government.

Jomaa’s new cabinet will have to tackle demands from international lenders to cut public spending and curb the budget deficit without triggering protests over social welfare.

Islamist militants, tied to al Qaeda operations in North Africa, are also an increasing threat for a country that relies heavily on European tourism and overseas remittances for its hard currency income.