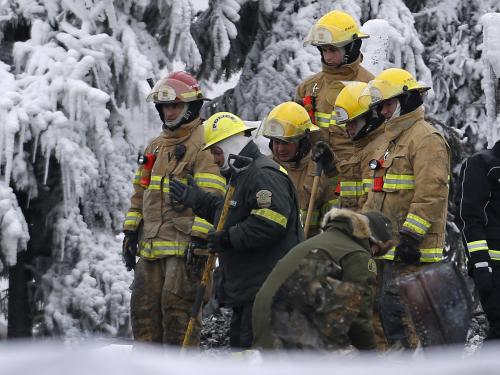 “These are events we very much don’t want to happen, and so we have to do everything possible to make sure they don’t happen again,” she told reporters after arriving in town..

Authorities fear 32 people died early on Thursday when fire ripped through the Residence du Havre in L’Isle-Verte, a town of 1,500 people some 230 km (140 miles) northeast of Quebec City in eastern Canada.

Roch Bernier, co-owner of the residence, greeted the congregation somberly and was given a standing ovation.

“I come to you with a heart full of emotion and at the same time enormous suffering,” he told the mourners, saying he considered the residents to be part of his family.

Bernier also called on people not to look for blame.

“Let us find out what we can to do to help each other,” he said before returning to his seat, barely able to choke back tears.

A larger public mass is due to be held in the town on February 1. A spokesman for Canadian Prime Minister Stephen Harper did not immediately respond when asked whether Harper would attend.

“My thoughts and prayers are with the families of the victims of the terrible fire in L’Isle-Verte,” Harper said in a statement on Twitter.

Despite media reports that a cigarette might have ignited the blaze, police say they still do not know the cause.

Only part of the residence was equipped with sprinklers. Quebec law does not require sprinkler systems in residences where the occupants have some mobility.

Premier Marois said she would wait for the results of an inquiry into the blaze and the report of a committee examining the question of sprinklers before deciding what to do next.

“If they recommend to change the rules and change the law and implement sprinklers, we will do it … but we will take the time to do that very well and not do it (as) an emergency,” she said, speaking in English. Police say it could take months to find the cause.

Earlier in the day, high winds and driving snow forced Quebec police to briefly suspend their search for bodies in the ice-clad ruins of the three-storey wooden residence.

Specialist teams at the fire site had worked through the night, using steam and a machine blowing hot air to melt ice that in some places was 2 feet (60 cm) thick – a result of the large amounts of water used to put out the fire.

Ten bodies have been recovered and 22 people are still missing.

“It’s a terrible tragedy. But we have to keep going, one step at a time,” said Marco Gagnon as he helped customers at a grocery store carry their bags out into the wind.

“It’s going to leave a big hole in the village. That’s 2 percent of the population,” he told Reuters.

Most of the 50 or so residents were over 85, and many needed to use wheelchairs or walkers, town officials said.

Grocery store owner Christian Morin paused after mopping the floor to reflect on two of his relatives who perished – an 82-year-old aunt and an uncle in his early 90s.

“What frustrates me is these people went to finish their days in peace, but to finish in this way …,” he said, his voice trailing off.

His aunt was able to walk and lived on the ground floor but still died in the blaze, which firefighters say was fanned by unusually high winds.

“We have to be very careful at this point not to draw conclusions, not to pass judgments. Wait for the inquiry to finish. Rumours don’t help anyone, or blaming this or that person. It’s not the time for that,” she said.

Town officials and residents interviewed by reporters have said the residence was clean and appeared to be well run. The residence says on its website that it won provincial awards for good service in 2004 and 2006.

The disaster looks set to be the second-worst to hit a Canadian seniors’ home after a 1969 fire in Quebec that killed 54 people.

In July 2013, a runaway tanker train carrying light crude from North Dakota’s Bakken region derailed and exploded in the heart of the town of Lac-Megantic, Quebec, killing 47.