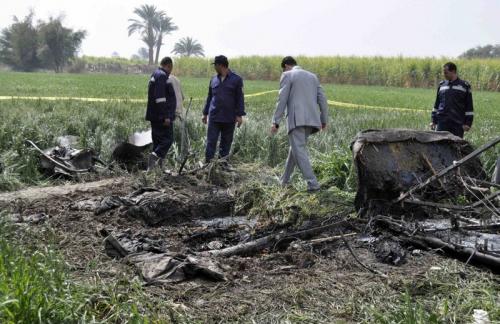 The balloon came down in farmland a few kilometres from the Valley of the Kings and pharaonic temples that draw tourists to Luxor. Rescue workers gathered the dead from the field where the charred remains of the balloon, gas canisters and other pieces of wreckage landed.

One Egyptian was also killed, Health Minister Mohamed Mostafa Hamed told Reuters, listing the other victims as tourists from Japan, China, France, Britain and Hungary. Earlier, officials had said all the dead were foreigners.

The pilot survived by jumping from the basket when it was 10-15 metres from the ground, said Ahmed Aboud, head of an association representing Luxor balloon operators. Two other survivors, both British, were treated at Luxor hospital, said Mohamed Mustafa, a doctor at the hospital.

Travel firm Thomas Cook later said one of the Britons taken to the hospital had died, taking the number of British tourists killed to three. The fatalities were caused by burns and by the impact, Mustafa said.

“We believe a small number of British nationals are involved in an incident in Luxor this morning,” Britain’s Foreign Office said in an emailed statement. The Japanese embassy in Cairo said it believed four Japanese had been aboard and had sent staff to Luxor to confirm this. France’s foreign ministry said two French citizens had been killed.

Aboud said the blast had happened in the pipe linking the gas canisters to the burner. He said that it was an accident.

Konny Matthews, assistant manager of Luxor’s Al Moudira hotel, said she heard an explosion at about 7 am. “It was a huge bang. It was a frightening bang, even though it was several kilometres away from the hotel,” she said by phone. “Some of my employees said that their homes were shaking.”

The balloon crashed on the west bank of the Nile river, where many of the major historical sites are located.

US photographer Christopher Michel, who was on board another balloon, told Britain’s Sky News television that the balloon was one of eight flying at the time. “We heard a loud explosion behind us. I looked back and saw lots of smoke. It wasn’t immediately clear that it was a balloon,” he said.

Hot air ballooning at dawn is popular with tourists, who are a mainstay of the Egyptian economy, although visitor numbers have fallen sharply since a 2011 uprising that toppled President Hosni Mubarak. Two years of political instability have kept away many foreign tourists.

Tourism accounted for more than a 10th of Egypt’s gross domestic product before the revolt. In 2010, about 14.7 million visitors came to Egypt, but this slumped to 9.8 million the next year.

Egyptian Civil Aviation Minister Wael el-Maadawi said a committee from the ministry was heading to Luxor to investigate the incident. He said hot air balloon flights would be stopped until an investigation into the cause of the accident.

“We cannot say whether this was because of maintenance or human (error) until the investigation committee is completely done with its investigation,” he told Al Jazeera TV’s Egyptian channel.

A leading support group for victims of clerical sexual abuse also made what it called a “last-ditch plea” to Pope Benedict to use his authority before resigning on Thursday to discipline bishops who have protected predatory priests in their dioceses.

The abuse issue took on new urgency after Scotland’s Cardinal Keith O’Brien, accused of improper behaviour with young priests, quit as Edinburgh archbishop on Monday and pulled out of the Sistine Chapel conclave to elect a new pope.

A Scottish Catholic Media Office spokesman has said O’Brien was taking legal advice and contested the “anonymous and non specific” allegations against him.

Cardinal Cormac Murphy-O’Connor, now the only British prelate due to attend pre-conclave talks among cardinals at the Vatican next week, said in London the sexual abuse of children was the most serious scandal in the Church.

“That will be one of the main things the cardinals will be discussing,” said Murphy-O’Connor, who cannot vote because he is over 80 years old but can join the cardinal electors in their closed-door discussions about the challenges for the next pope.

French Cardinal Jean-Louis Tauran said in a newspaper interview that the cardinal electors, who number 115 after O’Brien stepped down, should also be informed about a secret report on Vatican corruption prepared for Pope Benedict.

The retiring pontiff has decided to reserve the report for his successor, but the three cardinals over 80 years old who drew it up will be allowed to inform the cardinal electors about some of its findings during next week’s consultations.

“The cardinal electors cannot decide to choose this or that name to vote for if they don’t know the contents of this dossier,” Tauran told La Repubblica newspaper.

“If it’s necessary, I don’t see why they should not ask for names,” said Tauran, a former Vatican foreign minister who now heads its department for interreligious dialogue.

Italian newspapers have been speculating for days about conspiracies and alleged sexual scandals inside the Vatican that may have influenced Benedict to become the first pope in some six centuries to step down rather than die in office.

The Vatican has accused these newspapers of spreading “false and damaging” rumours in an attempt to influence the cardinals who are starting to arrive in Rome for the pope’s farewell meeting with them on Thursday.

The rights group documented 75 cases of predominately Tamil men and women who said they were held in Sri Lankan detention centres and repeatedly raped and sexually abused by the military, police and intelligence officials.

The victims – now living as asylum seekers, most of them in Britain – said once they confessed to being a member of the Tamil Tiger rebel group, the abuse generally stopped and they were allowed to escape by paying a bribe.

“We found that rape was used to secure some sort of confession, but also as a political tool to punish people,” Meenakshi Ganguly, the rights group’s South Asia director, told a news conference in New Delhi.

Other victims said they were “severely tortured, burnt by cigarettes and hung upside down,” he added.