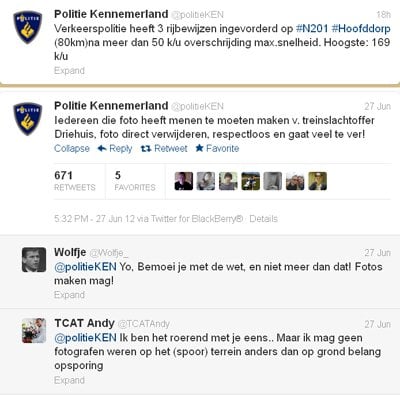 PHUKET: Teenagers who witnessed a man jump in front of a train in the Netherlands yesterday took photos of his decapitated body and posted them to Twitter, where the victim’s son saw them before learning it was his father.

The incident took place late yesterday morning when the unidentified man jumped onto the track at a train station in Driehuis, a small town in the province of North Holland, about 18 kilometers (11 miles) northwest of Amsterdam. It happened as a group of teenage students stood on a platform nearby.

Moments after the man was killed by a train, several students posted photos and a video of the man’s body on Twitter, where thousands of people viewed it. “Here. Here is the body. Here he is,” a boy can be heard shouting in the background of the video. Another student talks about the victim’s severed head as the camera points at it.

The photos and video spread quickly among Twitter users in the Netherlands, many of whom expressed their shock and condemnation. “Disgusting, these photos on Twitter of the suicide in Driehuis. The person who posted these is really sick,” user LBangma wrote.

Police were reluctant to comment on the incident but called on people to delete the photos. “Everyone who felt obligated to make a picture of the train victim [in] Driehuis: remove picture immediately. Disrespectful, and goes way too far!,” Kennemerland police wrote on their Twitter account.

Local police officer Edwin Verweij, who informed the man’s relatives of his death, wrote on his Twitter account that the victim’s son had seen the photos before he knew it was his father.

“Have had to tell relatives of the victim that their husband and father has been killed,” he said. “Very emotional. Son saw pictures online before he knew it was his father! Very heavy so that’s why the request [to delete the photos]!”

Verweij refused to comment today and referred questions to the communications department, where a police spokeswoman confirmed the victim’s son had viewed the pictures online before he knew it was his father. “Yes, that is correct,” the spokeswoman said, declining to go into further details.

The spokeswoman said police do not want to discuss the incident, saying it had received enough attention. “They were very shocking photos and the person who posted the pictures realized this immediately and started deleting things,” she added. “And we prefer to leave it at that, because the cause itself is tragic enough.”

Phuket Gazette: Roland might have key to longer life