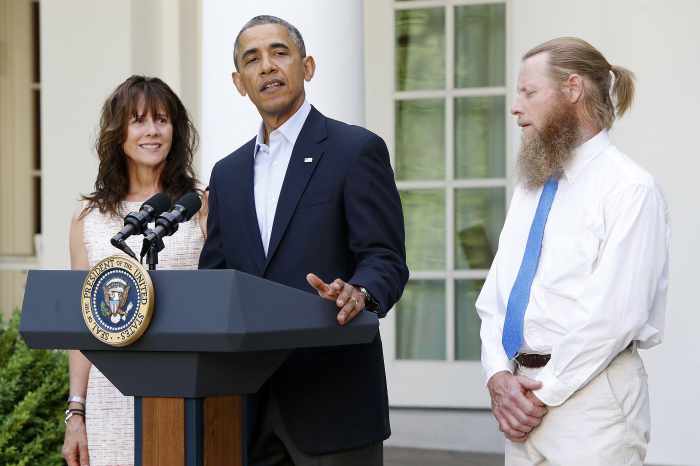 PHUKET: President Barack Obama defended on Tuesday the prisoner swap deal that freed a U.S. soldier from Taliban captivity in Afghanistan, and the Army pledged to investigate the circumstances of his capture after fellow soldiers said he had deserted.

Trying to defuse concerns of members of Congress who said the president broke the law by not giving them advance notice of the agreement, Obama told a news conference in Warsaw: “Regardless of the circumstances, whatever those circumstances may turn out to be, we still get an American soldier back if he’s held in captivity. Period. Full stop.”

Top White House officials also tried to tamp down outrage in the Capitol by calling key lawmakers to apologise personally for failing to fill them in on the administration’s plans before last weekend’s prisoner swap.

Obama said the five Afghans released into the custody of the Gulf emirate of Qatar would be closely monitored there. Under the terms of the deal that freed 28-year-old U.S. Sergeant Bowe Bergdahl after being held for five years, the Taliban leaders must remain in Qatar for a year.

A senior Gulf official said on Tuesday the men had been moved to a residential compound in the capital, Doha, and can “move around freely within” Qatar.

The White House tweaked some Republican lawmakers for their criticism. It pointed reporters to Senator Kelly Ayotte’s remarks two weeks ago urging the Pentagon to “redouble its efforts” to return Bergdahl to his family and Senator John McCain’s comment in February saying he might support a prisoner swap.

Lawmakers from both political parties are concerned about the terms of the prisoner exchange, questioning how closely the released Taliban leaders would be monitored and whether it would set a precedent. The five Afghans had been held at the much-criticized U.S. military base of Guantanamo Bay, Cuba, and Congress is required to be given 30 days notice for any transfer of prisoners from there.

Senator Richard Durbin, the chamber’s second-ranking Democrat, emerged from a meeting with White House Chief of Staff Denis McDonough and presidential adviser John Podesta saying there were questions about the required 30-day notification.

Durbin also said, “until I know the circumstances in Qatar, it’s kind of hard” to give an opinion about the prisoner swap.

California Republican Howard “Buck” McKeon, chairman of the House Armed Services Committee, said on Tuesday he had invited Secretary of Defence Chuck Hagel to testify on June 11 at a hearing on the Taliban detainee transfer.

House of Representatives Speaker John Boehner endorsed a call for congressional hearings to look into the administration’s handling of the prisoner swap, as did Majority Leader Harry Reid of the Democratic-dominated Senate.

Reid said he had been told Obama did not violate the law requiring 30-day notice of Congress before transferring Guantanamo prisoners, but Boehner said the “administration has invited serious questions into how this exchange went down.”

An aide said the first call from the Department of Defence to Boehner came at 11:52 a.m. EDT on Saturday, when the news was already being made public. The caller acknowledged that the administration’s action was inconsistent with the law requiring a 30-day notification.

But Senator Carl Levin, the Democratic head of the Senate Armed Services Committee, said the president put Congress on notice on December 23, 2013, that he would “act swiftly” regarding detainee transfers if necessary.

“Given that notice, members of Congress should not be surprised that he acted as he did in the circumstances that existed,” Levin said.

Bergdahl is in a military hospital in Germany, undergoing physical and mental assessments. Obama said Bergdahl was not being interrogated by military authorities and had not yet seen his family.

Bergdahl’s release has unleashed criticism from former comrades about the circumstances of his disappearance and capture. According to some online accounts of soldiers, Bergdahl left his unit quietly, without his flak jacket and heavy fighting equipment. Several soldiers were killed in searches for Bergdahl, according to some of these accounts.

The Pentagon has said it was unable to confirm media reports that six troops died in searches for Bergdahl. It said the circumstances surrounding his June 2009 disappearance were unclear.

After Bergdahl failed to show up for roll call, U.S. officials picked up radio communication between Taliban insurgents who said “an American soldier with a camera is looking for someone who speaks English,” according to U.S. diplomatic cables.

Josh Korder, a former U.S. Army sergeant who served with Bergdahl, told NBC he was “quite upset” about the sergeant’s release because his unit had worked hard to track down Taliban leaders like those released in exchange for him.

Facing a flood of questions, the U.S. Army said on Tuesday it would further investigate, but not until after the initial stages of the reintegration process.

“Our first priority is ensuring Sergeant Bergdahl’s health and beginning his reintegration process. There is no timeline for this, and we will take as long as medically necessary to aid his recovery,” Army Secretary John McHugh said in a statement.

Saudi MERS deaths jump to 282 ahead of Hajj