The captains of two trawlers accused of having fished an endangered pregnant whale shark off the coast of Phuket potentially face a heavy fine of up to 3 million baht and confiscation of their vessels, according to authorities.

A video clip, which has been widely shared on social media, showed that after being pressured to release the shark, the fishermen used a crane to pick it up and push it over the vessel to dump it back to the sea. The witnesses aboard the dive boat said the mother shark was badly injured and her unborn shark baby was seen falling out of the mother’s belly. It is unclear whether the sharks survived. 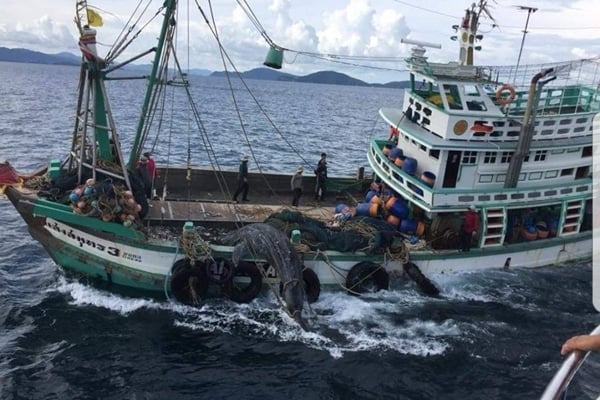 Fisheries Department director-general Adisorn Promthep said that based on the report of the event, officers had inspected the vessels after they tied up at the Phae Saeng Arun Phuket fishing pier and determined the identities of the trawler captains, Somsamai Meechom and Rattana Phromngam. The officers have filed complaints with the police against Somsamai, Rattana and other suspects, asking that they be charged with catching a whale shark and bringing it on-board, which is a violation of Article 66 of Fisheries Decree, Adisorn said.

“The offenders under this charge are subject to punishment of a 300,000 to 3 million baht fine, while the fishing licences for these vessels would be revoked and they are also permanently banned from applying for a new fishing licence,” he said.

“Currently, the officers have already seized the trawlers and confiscated catches and fishing equipment, and if the vessels are found to have been used in a serious crime as per the Fisheries Decree, the court can order confiscation of the vessels as well.” Marine and Coastal Resources Department director-general Jatuporn Buruphat said the vessels’ location data from Port In–Port Out (PIPO) Control Centres in Phuket showed that the pair of trawlers did not fish in a restricted area. However, from the clear evidence of a whale shark having been caught, they not only violated the Fisheries Decree, but also the Wild Animal Reservation and Protection Act, since whale sharks are on the list of protected animal. The suspects are thus open to a four-year imprisonment and a 40,000 baht fine if convicted, Jatuporn said.

“Our agency has the power to file a complaint on the offence of killing a protected animal, and as of now I have ordered the officers to gather all evidence to sue this case with the police,” he said.

He also said that the team of officers from Marine and Coastal Resources Department was working with the navy to search for the whale shark, while he will go to Phuket to carry out an inspection on the issue himself. Somsamai, the captain of Saeng Samut 3, said his trawler caught a very heavy marine animal, while fishing off the coast of Phuket on Friday afternoon, but they did not know that it was a whale shark, so the workers brought in aboard the vessel.

“After we found that it was actually a whale shark, we were trying to return it back to the sea. But it was too heavy to carry, so we had to use a crane to pick it up,” Somsamai said.

“We all know that catching a whale shark is a criminal offence, but we caught it by accident and did not intend to harm it.”

The whale shark is the world largest fish. It is harmless to humans, and consumes only plankton. The status of whale sharks around the world has raised concern as their numbers rapidly dwindle. It is listed as endangered by the IUCN Red List and it is internationally protected under CITES.

Banjong Nasae, Thai Sea Watch Association president, said it was not the first time trawlers had caught rare marine animals out at sea, and this incident clearly showed that trawlers are destructive to the marine ecosystem and need to be more tightly controlled. Banjong said that if no one had noticed that this trawler carried a whale shark, there was the possibility that the crew would not have returned it to the sea but instead sold it in the market as many parts of a whale shark are valuable.

“It is clear that our regulations to monitor fishing activities of trawlers are still weak and allow these destructive fishing vessels to cause damage to the ocean’s ecosystem, so stricter control on trawlers is required to make sure that our fishing industry will be sustainable,” Banjong said.

Video and stories HERE and HERE.