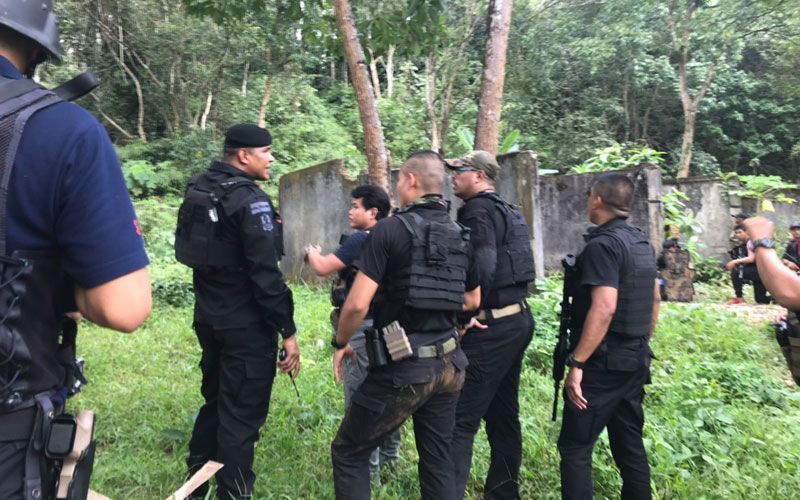 PHOTO: Defence olunteers survey the site of a clash with rebels - Naew Na

An insurgent is dead and two defence volunteers wounded after a clash in the the southern border province of Narathiwat on Sunday. Police reports indicate a group of insurgents attacked a defence volunteer outpost in the Sukhirin district just before noon, injuring two. Reinforcements rushed to the scene and fired on the fleeing gunmen who headed for the nearby woods.

One guerilla, identified as 29 year old Abdulhadi Arbu Daoah, was shot dead. Other insurgents fled into the jungle. Despite some positive signs over the last 16 years, there has been little progress in talks between the government and the mainly Muslim insurgents in Thailand’s restive deep south.

The insurgency originated in 1948 as an ethnic and religious separatist movement in the historically Malay Patani region, which comprises what are now Thailand’s southernmost provinces, but it has become more complex and violent since early 2000s, due to drug cartels, oil smuggling networks and sometimes even pirates.

Since 2004, at least 7085 people have been killed and more than 13,000 injured in literally tens of thousands of violent incidents. Among the victims are teachers, monks and children, both Buddhist and Muslim.

While the number of such incidents per year is declining, their severity is on the rise.

Fifteen people were killed in an attack on a village defence checkpoint Yala province late last year, the most violent security checkpoint attack in over a decade.

Base jumper rescued after dangling from sheer cliff face in Phattalung