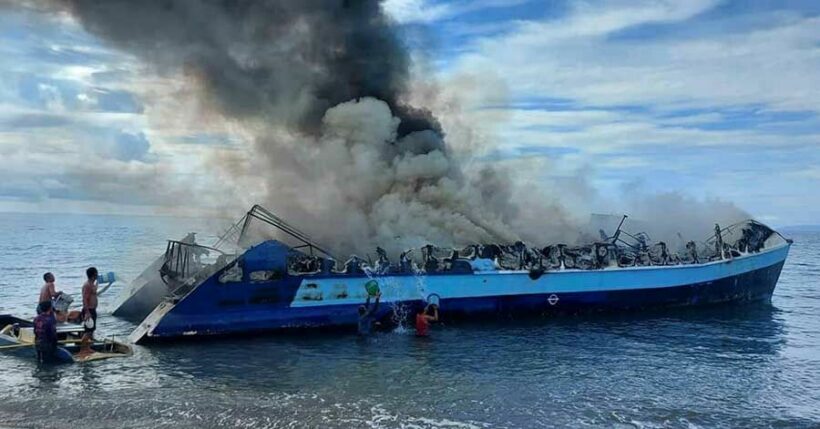 A fire on a passenger ferry in the Philippines has left 7 people dead, with another 7 still missing. According to an AFP report, 120 have been rescued so far. The fire broke out on the Mercraft 2 at around 6.30am local time yesterday (5.30am Thai time). The ferry, which has a 186-passenger capacity, was transporting 134 passengers and crew from Polillo Island to the island of Luzon, according to the report.

It’s understood the fire tore through the vessel, with passengers left with no choice but to jump overboard, according to the coast guard and other witnesses. Armando Balilo, a spokesman for the Philippine Coast Guard, says at least 7 have been killed and 120 rescued so far. The search for another 7 still missing is ongoing.

Kycel Pineda, a passenger on another ferry has described the scene for AFP.

“We heard an explosion. When we saw the boat, it was already engulfed by fire and passengers were already floating in the sea.”

Photos shared by the coast guard show the ferry engulfed in flames, while passengers float in the water with the aid of life rings and life vests. A number of passengers were rescued by other ferries or climbed into inflatable boats.

Balilo says the fire seems to have started in the engine room, but a full investigation is being launched to determine the cause of the blaze. According to Brunette Azagra, the captain of another passenger boat that was around 500 metres from the Mercraft 2 when the fire broke out, sea conditions were “quite good”.

“We were able to rescue 40 survivors. We have 2 fatalities. They were lucky because we also came from Polillo. They overtook us, but we were just nearby.”

The Philippines has a reputation for poor sea transport, with ferries and ships poorly regulated and numerous reports of overcrowding and accidents at sea. It’s understood the fire on the Mercraft 2 has now been extinguished and the wreckage has been brought to shore.

At least 53 dead after tropical storm Megi hit the Philippines