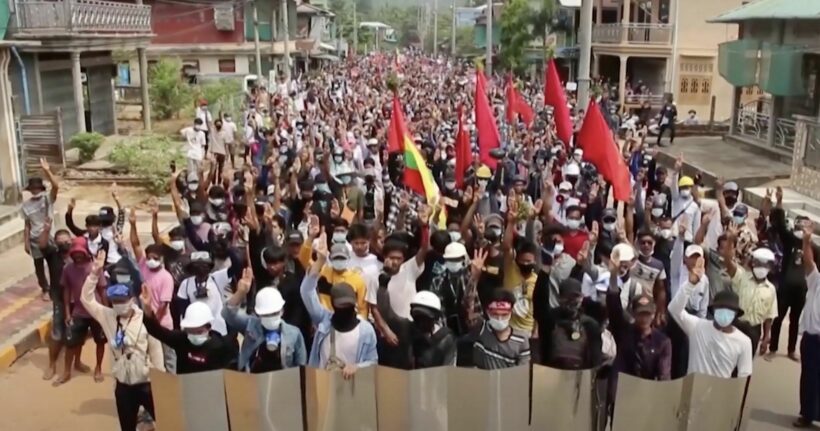 As the country commemorated its annual Armed Forces Day, Myanmar army troops continued to turn on the country’s citizens with reports of more than 100 people killed over the past 24 hours. News site Myanmar Now report’s yesterday’s death toll had reached 114. On the BBC, more than 90 deaths in yesterday’s violence was confirmed by the Assistance Association for Political Prisoners monitoring group. Other media outlets are reporting at least 50 killed.

Yesterday marked Myanmar’s annual Armed Forces Day, which usually commemorates the beginning of resistance to Japanese occupation in 1945. Defying warnings from the Tatmadaw, the lethal crackdown continued as protesters took to the streets. State TV broadcast an announcement on Friday night warning people… “you should learn from the tragedy of earlier ugly deaths that you can be in danger of getting shot to the head and back”.

It makes yesterday, March 27, the single deadliest day since the February 1 coup when the government of Aung San Suu Kyi was ousted by the country’s military leaders in a bloodless early morning coup. The number of Burmese civilians reported killed since the coup has now reached 440 people.

Videos which are being uploaded from Myanmar show indiscriminate shootings from military gangs (below). There are many, many more making their way into social media, an indication of the real situation in the country.

Now calls are growing louder in the international community for the UN Security Council to take firm and swift action, including an emergency international summit. ASEAN, mostly, has remained silent over the killings of Myanmar’s citizens.

UN special rapporteur Tom Andrews says the Burmese junta should be cut off from funding, including oil and gas revenues, and had their access to weapons cut off.

“Words of condemnation or concern are frankly ringing hollow to the people of Myanmar while the military junta commits mass murder against them.”

“Words are not enough. It is past time for robust, coordinated action.”

A statement condemning Myanmar’s security forces, has been signed by 12 heads of defence in the following countries – Australia, Canada, Denmark, Germany, Greece, Italy, Japan, Netherlands, New Zealand, South Korea, UK and the US. The joint statement is a rare declaration by senior military commanders from countries around the world.

The statement says Myanmar’s military “has lost credibility with its people”.

“As chiefs of defence, we condemn the use of lethal force against unarmed people by the Myanmar armed forces and associated security services.”

“…a professional military must follow international standards for conduct “and is responsible for protecting, not harming, the people it serves.”

Additionally, an EU delegation to Myanmar has described yesterday’s killing spree as a “day of terror and dishonour”, saying the country has marked a “new low”.

News reports and witnesses claim security forces killed 114 people, including children, yesterday as part of the wider crackdown on dissenters after the February 1 military coup ousted the elected civilian government.

According to The Guardian, the London-based Burma Human Rights Network is calling on the international community “to tighten economic sanctions on Myanmar’s business interests and impose a global arms embargo and a no-fly zone in the country’s ethnic conflict zones”.

“Every day the horror committed of the Burmese army gets worse as they become more desperate to cling to the power they stole from the people. The international community must respond immediately to end this nightmare for the Burmese people.”

With both Russia and China, who have supported the Burmese military in the past, being veto-holding members of the UN security council, they could block any potential action or sanctions on Myanmar at this time.

Thailand , Russia, China, India, Pakistan, Bangladesh, Vietnam and Laos also sent representatives to attend the Armed Forces Day parade in the nation’s capital. Russia was the only one to send a senior minister.