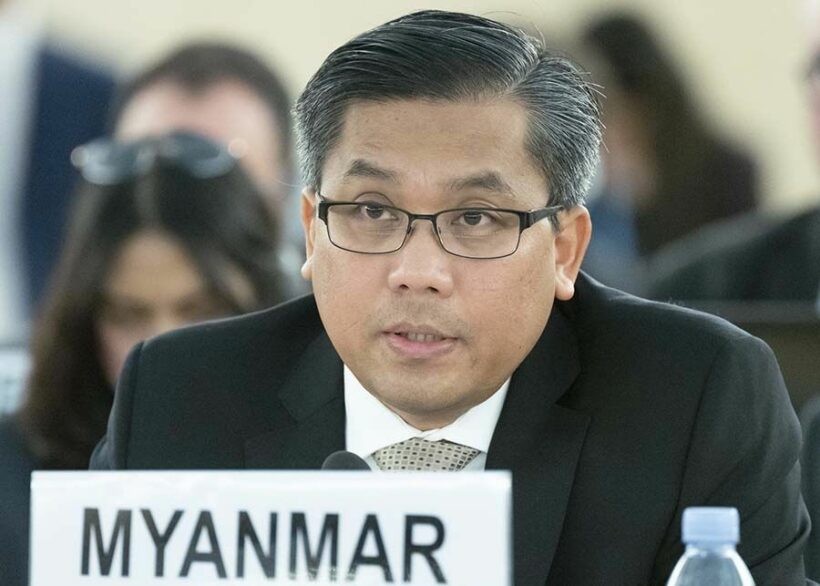 The Burmese UN envoy says he’s intent on seeking international support for democracy in his country. Kyaw Moe Tun was speaking to Japanese news agency NHK at the UN offices in New York. He was made UN envoy by the former Burmese government, which was ousted in a military coup in February, despite having been democratically elected.

According to a Thai PBS World report, he continues to be seen as representing Myanmar as the UN Credentials Committee has not made a decision on future representation. The UN envoy has declared that if he remains in the position, he wants to focus on representing the people of Myanmar and their struggle for democracy in the face of military oppression.

“Please do understand the situation Myanmar is facing. So, that is what I’d like to appeal to the international community to please understand the people of Myanmar. We would like to be our own defence, people’s defence revolution against the military.”

The ambassador has vowed to continue appealing for the lives of innocent Burmese citizens, calling for an end to the military coup, and the restoration of democracy in his country. He says over 1,100 civilians have been killed by the Burmese military regime and has urged the international community to understand calls from pro-democracy forces in Myanmar encouraging an uprising against military rule.

Thai PBS World reports that security around the UN envoy has been tightened since the discovery of an assassination plot against him last August, which is being investigated by law enforcement officials in the US.

gummy
16 minutes ago, Rain said: Will it? Really?  Historically, U.N. Peacekeeping has never had an impact anywhere.  Also, kinda convenient how the Anglo-American dominated U.N. "Peacekeeping" missions are extremely selective......most of the troubles that plague the world have been instigated…

palooka
I think the message is they are going to start a military revolt against the junta and are asking the world to be understanding of their actions. They don't want UN, USA or CHINA to be part of it. The…

Rain
15 minutes ago, palooka said: I think the message is they are going to start a military revolt against the junta and are asking the world to be understanding of their actions. They don't want UN, USA or CHINA to…

Poolie
1 minute ago, Rain said: There must be at least 4 separatists/rebellion factions that have been engaged against the successive Burman Juntas forever. The underlying question might be: who's supplying them with weaponry and sundries as such? Hmmmm........wonder who? 🤨 Quite.…

palooka
7 minutes ago, Rain said: There must be at least 4 separatists/rebellion factions that have been engaged against the successive Burman Juntas forever. The underlying question might be: who's supplying them with weaponry and sundries as such? Hmmmm........wonder who? 🤨 I…