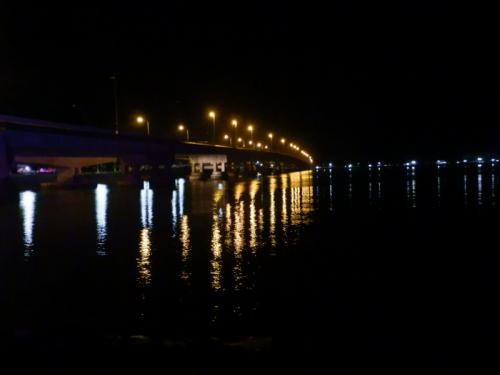 PHUKET: A 43-year-old woman was rescued from the fast-flowing water in the channel separating Phuket from the mainland two hours after she was seen standing at the railing of Thao Thepkrasattri Bridge.

“She stood there for a long time, and looked like she was going to climb the railing and jump,” one witness said.

“When we arrived there was a Honda car parked halfway across the bridge,” said Lt Col Prakob Boonkwan.

Inside the car was a purse, a book and an identification card confirming the woman as Nisapat Petchkhao, 43, from Phang Nga.

“In the book was a message she wrote to her family, asking them to forgive her and take care of her children,” Col Prakob said.

Kusoldharm Foundation rescue workers began searching for Ms Nisapat, but failed to find her in the dark.

“We searched for two hours, and then at about midnight local villagers fishing at the northern end of the bridge reported they saw a woman floating in the water,” Col Prakob explained.

“She was rushed to Takua Thung Hospital in Phang Nga. She was safe and had suffered only some minor scratches from the rocks,” he said.

“I tried to question her about the incident, but she declined to answer any of my questions,” Col Prakob said.