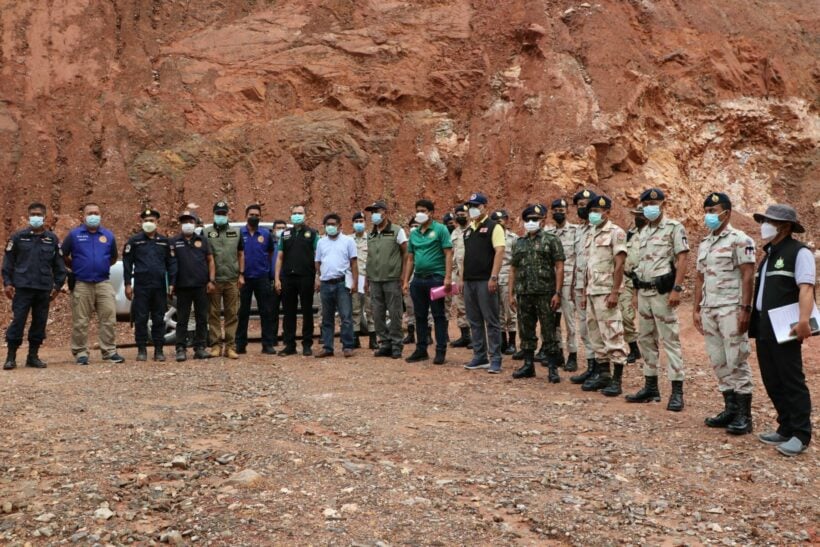 After Thai media reported construction tools and trucks digging soil on a hill in Kamala, a town in Phuket, officials have banned any further excavation on the site. Kathu District Chief Siwat Rawangkul confirmed the ban when he and other officials revisited the site on Tuesday. He said that no government office has issued a building permit for any form of construction.

Now, officials have been given 7 days to identify which local administration is responsible for the site where the activity took place. It is located on the border between Kathu subdistrict and Koh Kaew subdistrict. Thai media outlet Isra News reported last week that the site was 90 metres above sea level, and therefore any construction was illegal.

Siwat said that officials are also investigating the land-use document presented to claim the land. He said the NorSor 3 document looks to be issued for a plot of about 40 Rai, but the construction on the site only covered about 4 rai. In Phuket, using a land title document to claim another plot of land is known as ‘Flying SorKor’.

The Office of Natural Resources and Environment is also investigating the excavation to decide whether any environmental laws were broken.

After news broke on Thai media that a backhoe was seen digging soil and loading it onto trucks in Kamala, a town on the central west coast of Phuket, officials are now investigating what is suspected of being an illegal land excavation. Isra News Agency, the Thai media platform that first reported the incident, published photos on Thursday of what appears to be a construction site on a steep slope in Kamala hills. The site is reportedly near a “famous golf course”.

The next day (May 6), Phuket’s public relations office announced that relevant agencies had inspected the area, and there were 2 investigations. Officials who investigated the site were from the Phuket Provincial Land Office, the Phuket Forest Ministry, the Phuket City Forest Protection and Development Unit, the Kathu District Office, and other relevant agencies.

The team that inspected the site reportedly did not find anyone there, and no construction machinery was there when the team went to investigate. Officers still took photos of the site, which were posted on PR Phuket’s Facebook page. PR Phuket noted that it appears that the area is operated by the Electricity Generating Authority of Thailand.

In its reportage of the site, Isra News Agency said that excavating the site might violate many laws, including by encroaching on a protected forest reserve.

“Excavating soil in such steep hill areas without permission from relevant authorities may be in violation of many laws.”

An illegal construction incident happened in Thailand’s south in March when an unnamed party was allegedly building a road on a historic mountain in Songkhla province. The mountain is Khao Daeng. It has historic archeological structures. Civic groups that gathered at the local fine arts office to support authorities told the Bangkok Post many trees were cut down, and soil had been dug out.

Guest1
38 minutes ago, Thaiger said: digging soil on a hill in Kamala And it is still in Kamala, even if between Kathu and Koh Kaew on Phukets east side? Amazing Thailand!

Cabra
Follow the money. Probably just another hi-so elite doing as they please

Soidog
This spat is just about which office gets the brown envelopes from the developer. No other reason.
Ramanathan.P
There is always an incident for official photo session....