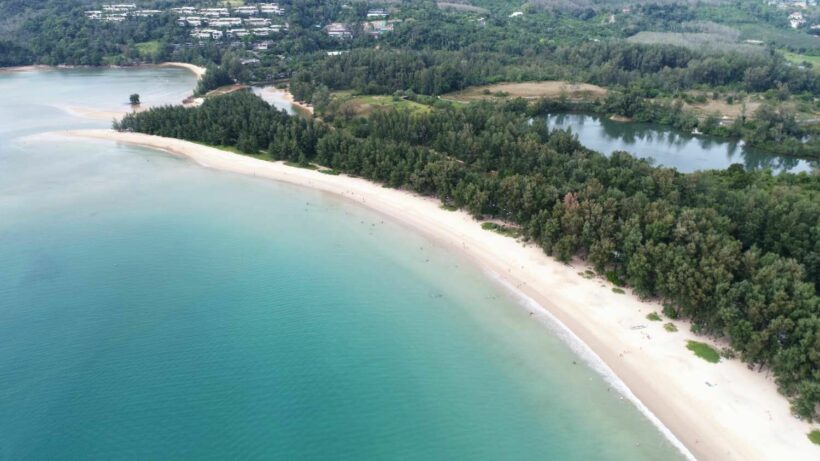 Beachfront land in Phuket valued at 50 billion baht remains occupied, despite the Supreme Court’s orders for 9 claimants to vacate their plots. The Thai government, locals and companies have squabbled over the 178 rai of land – which covers 3 kilometres of Layan Beach – for 30 years. Officials from the Department of Special Investigation, or DSI, inspected the land yesterday in hopes of solving the dispute and prosecuting anyone illegally occupying state land.

There remains a spattering of larger and smaller restaurants and beach bars that have ordered off the crown land property but seep back after the ‘crackdowns’. They remain trading after decades of cat and mouse as both the local Or For Tor, provincial and national governments have tried unsuccessfully to evict them.

In 1984, the Lands Department revoked illegally-issued land title papers from 9 claimants. However, most of the claimants refuse to recognise the revocation and have occupied the land ever since. Claims to the land were firstly made by individuals, but have now also been made by companies who are running lucrative businesses on the land.

Director-General of the DSI Traiyarit Temhiwong inspected the land yesterday with a team of investigators. He said the DSI has taken up an investigation to see whether any claims to the land can be verified. Traiyarit warned that anyone found to be trespassing on government land – valued at 300 million baht per rai – would face prosecution.

Six of the nine claimants filed official objections to the decision that decided their claims to the land were illegal. Three did not officially contest losing their claims, but are still occupying the land. Some of the plots now lie within the boundaries of Sirinath National Park.

The government claims that all 178 rai is state land. The government’s aim is to leave the area in an undisturbed state for the public use recreationally, according to Traiyarit.

“There are many land dispute cases in Phuket, but we are paying a lot of attention to this case because other cases are now moving forward. Many cases are in the process of prosecution,” said Traiyarit.

“Ten cases of land claims have been passed on to the National Counter Corruption Commission, or NACC.”

Last year, luxury Phuket resorts Trisara and Sri Panwa faced legal action over illegally acquired land following an investigation launched by the NACC and DSI. The investigation found that the resorts were using land within national parks and forest reserves. Both resorts continue to occupy the disputed land.

Another investigation last year revealed that the Peak Residences in Phuket was illegally encroaching on protected forests at Kata Noi. The buildings were completely demolished as a result of the investigation.

Phuket has a long history of land disputes due to earlier officials illegally issuing land title deeds. Most of the illegal land title deeds have been attributed to Tawatchai Anakul, who was the Phuket Land Office Chief in 2003. Tawatchai went on the run for 13 years and was eventually found hanged in his cell at the headquarters of the DSI in Bangkok within hours of his arrest in 2016.