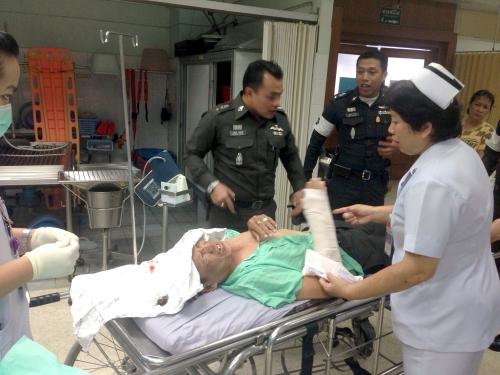 PHUKET: A Phuket City Police traffic officer was run down by a speeding motorcyclist late yesterday afternoon while trying to clear a rush-hour traffic jam near Vachira Phuket Hospital on Yaowarat Road.

Sen Sgt Maj Somsak Chuenbangbah was en route to Saphan Hin, where he was to make sure no trouble erupted at the “birthday funeral” being held there by V-Phuket anti-government protesters to mark the 64th birthday of fugitive former prime minister Thaksin Shinawatra (story here).

Sgt Somsak left Phuket City Police headquarters on Chumphon Road (map here) at about 5:30pm, but got no further than the end of the street, at the junction with Yaowarat Road, where he found himself gridlocked in a Friday afternoon traffic jam.

“I wasn’t actually on duty at the time. I was assigned to go to the V-Phuket protest at Saphan Hin… I wanted to help the public by doing my bit to try to improve the flow of traffic,” Sgt Somsak later told the Phuket Gazette.

“I was standing in the middle of the road directing traffic when a motorbike drove toward me at high speed – and actually crashed into me,” he said.

Maj Sakol Krainara of Phuket City Police soon received a call for assistance, as did staff at Vachira Hospital, located only about 350 meters up the road, who quickly dispatched an ambulance.

“We arrived to find Sgt Somsak lying on road, clearly in pain. His right arm and head were injured, and he was taken to Vachira Phuket Hospital,” said Maj Sakol.

Nearby, officers found Jakkrapong Suwan, 25, the driver of the motorbike.

“Luckily, he was not injured,” Maj Sakol said.

“Although the young man did not try to run away, and indeed offered his sincere apologies to the policeman he knocked down, Mr Jakkrapong was charged with reckless driving,” Maj Sakol added.