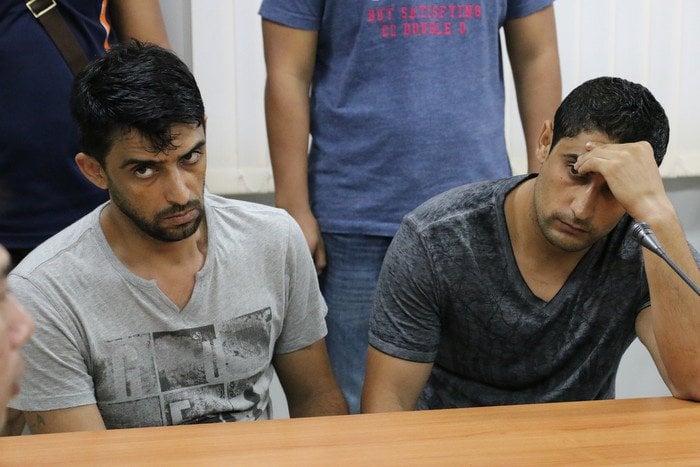 PHUKET: Two men wanted for robbery in Phuket and believed to be holding fake Turkish passports were arrested in Koh Samui yesterday.

Murad Mohammad Yahya, 37, and Wesam Kamal Murad, 27, are accused of stealing a Rolex watch, cash and other valuables worth more than one million baht, as well as illegally entering Thailand and presenting fake identification.

Both men were found carrying Kuwaiti and Turkish passports at the time of their arrest.

“We have yet to confirm whether the men are genuine Kuwaiti or Turkish citizens,” Tourist Police Region 5 Deputy Superintendent Rungroj Sayunprasert told the Phuket Gazette today.

The arrests follows reports of the suspects pretending to be friends with tourists in Phuket in order to gain access to hotel rooms last month.

“They had checked into a luxury hotel in Phuket, where they allegedly approached a wealthy Middle Eastern tourist,” Col Rungroj said

“The pair claimed that they had left something in their ‘friend’s’ room and asked hotel staffers to open the man’s room for them.”

Phuket Immigration Police notified Samui Immigration and Tourist Police about the pair after the men left Phuket late last month on a flight to Koh Samui.

“We finally found the men walking in front of a hotel in Bo Phut yesterday. Police presented themselves and then arrested and took the pair to Bo Phut Police Station,” said Col Rungroj.

An Israeli tourist, who police named only as Mohammad, who had his debit card stolen and used to withdraw 20,000 baht, came to the police station and told officers that he had been approached by the two men.

“The tourist confirmed that he had seen these men and spoken to them before his debit card was stolen,” Col Rungroj said.

Mr Yahya and Mr Murad have been charged with illegally entering Thailand, using falsified travel documents and theft, he explained.

“We have yet to verify their nationalities as we believe they have not handed police legitimate identification. The immigration stamps inside their passports are an old type that we do not use anymore,” Col Rungroj said.

“They said they entered Thailand via the Sadao border [with Malaysia] by car. However, there is no record of them crossing there.”

Col Rungroj added that the suspects claimed a Malaysian man had helped them secure an entry stamp for 1,000 ringgit.

“Police are continuing to question the suspects and contact other authorities to see if the pair are involved in any illegal networks outside Thailand,” Col Rungroj said.

The suspects have denied all the charges against them, he added.