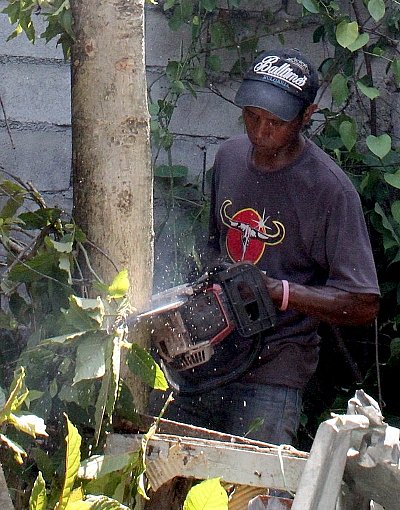 PHUKET: Chainsaw-wielding police took a cut out of the drug-supply in Phuket on yesterday, bringing down several enormous kratom trees on Luang Poh Road.

Despite kratom trees being native to Southeast Asia, their leaves have been considered a controlled substance, in the same category as cannabis, since promulgation of the Kratom Act in 1943. The law made planting the tree illegal and ordered all existing tress cut down.

The Crime Suppression Division unit led by Pol Maj Roongsak Maichandee inspected the site in Talad Yai, Phuket Town, after receiving reports form local residents that there were “many kratom trees” in the area, located in the heart of the town near the Phuket Provincial Commerce Offices.

“We found four enormous kratom trees. We believe each one is at least 10 years old,” Maj Roongsak said.

“We cut them down and moved them to the CSD Phuket office. So far nobody has come forward as the owner of the trees,” he explained.

“After today’s inspection, the officers have cut down all the kratom trees in the area to prevent the trees’ leaves from being used as drug,” Maj Roongsak said.

The community reported to the police the several “youngsters”, both from the community and elsewhere, came to the area to collect the leaves to make a concoction known as “4×100”.

The concoction – a combination of kratom leaf extract, cough syrup, cola and ice – is well-known throughout Southern Thailand, where reports of its existence go back to 2004.

Several sub-variants have also been reported, one of which includes ground up mosquito coils. Another, reported in Ranong, includes coffee and goes under the English-language name “one to call”, a play on a popular prepaid mobile phone service available in Thailand.