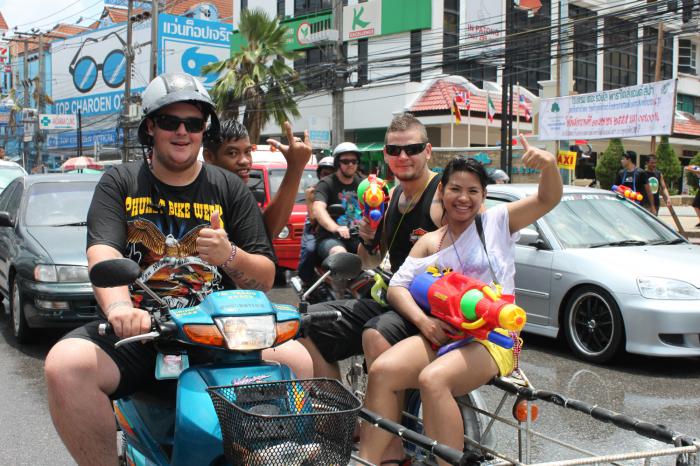 The announcement made it clear that the sale, purchase and consumption of alcohol will be banned within the Phuket water play zones and there will be no exception for any famous area, including, of course, Patong’s Soi Bangla, on April 13. The alcohol-free water-play zones are part of a slew of new precautions to make the 2014 Thai New Year festivities safer.

The water play areas have been chosen and set up at the governor’s discretion.

“Alcohol may not be conveyed into the areas, sold in the areas, or consumed there,” he added.

Police warn that those breaking Songkran alcohol rules will face imprisonment of up to six months, a fine of 10,000 baht, or both.

“Please be informed that drinking in cars will result in charges for both the driver and passengers, as well as those found drinking beside public roads. This is according to the Alcohol Act B.E. 2551,” said Phuket City Police Superintendent Sermphan Sirikong.

“The ban on the sale, purchase and consumption of alcohol in water play zones will be effective from 8am on April 13 to 6am on April 14,” he stated.

Col Sermphan also warned water-players in the back of pick-up trucks to be take care and play safely.

“Water-playing on trucks is dangerous. You may do it, but you must take precautions. Anybody found not doing so will be charged for causing a public nuisance or endangering public safety,” he added.

In addition, police will be manning 10 main checkpoints throughout Phuket during the “Seven Days of Danger” which runs from April 11 to 17.

“Ten main checkpoints will be set up throughout the island to maintain the road-safety plan as the number of road accidents during Songkran is much higher than normal,” Col Sermphan said.

The 10 police road-safety checkpoints in Phuket will be at the following locations:

“There will be 14 other small checkpoints on minor roads throughout the three districts of Phuket, as well as 12 checkpoints which can be moved around to keep an eye on drinking and driving, and motorists who do not wear helmets, in order to support road safety,” Col Sermphan added.

Irishman among three arrested for drug dealing in Phuket